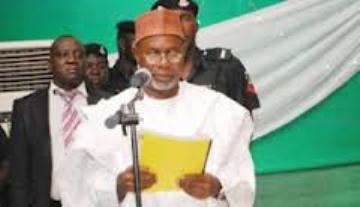 …Orders Reinstatement Of Suntai’s Former Deputy, Abubakar Danladi The Supreme Court has ordered the removal of the acting governor of Taraba State Mr. Garba Umar, directing that a former deputy governor, Abubakar Danladi be sworn-in.Danladi served as deputy to Governor Danbaba Suntai until September 2012 when he was impeached by the state House of Assembl for “gross misconduct.”Dissatisfied with his removal as the former deputy, Danladi approached the Federal High Court sitting in Jalingo, the state capital, seeking the quashing of his removal. The court upheld the decision of the lawmakers.Danladi also met a brick wall when The court of Appeal upheld the ruling of the High Court that he was duly and constitutionally impeached.The court held that the Taraba State House of Assembly complied with section 188 of the constitution in his impeachment.Reacting, a former Commissioner of Information, Hon. Emmanuel Bello hailed the judgment as a sign that the judiciary is alive to its responsibility.“It is a new dawn for Taraba State. The learned Justices of the Supreme Court have reinforced the confidence of the common man in the judiciary. It is a sign that better days are coming for Nigeria. We salute their courage,” Bello added.