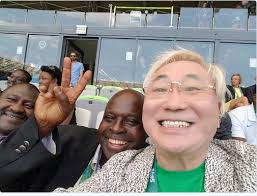 By Sadiq Umar – The Japanese surgeon, Katsuya Takasu, who fell in love with the Nigerian U23 team the ‘Dream Team’, following their defeat of his home country team has honoured his pledge of donating $390,000 to the team.

Mr. Takasu who was impressed by the resilience of the Nigerian side, who inspite of all odds put up impressive show to win bronze medal in the Rio Olympic football competition had pledged to reward the team.

The Japanese surgeon redeemed his promise on Saturday after the team defeated the Honduras side by 3-2 goals.

“I had travelled from Tokyo prepared to reward them anyway, and to watch them win the bronze inside the stadium was very fulfilling.”

“This team showed resilience and fought the hardest to achieve success, despite all their problems — some people would have given up but they didn’t,” said Takasu.

“In everything we must always let people understand that they are appreciated and not just in football but generally in life.”

The Nigerian team became the centre of attention for world football enthusiasts when they were stranded in the U.S where they had gone for training with little hope of arriving for their first match.

The team managed to arrive 5 hours into their opening match with a better funded Japanese side but still defeated them in a 5-4 victory.