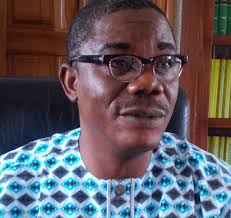 By Dipo Awojobi – Few days to the All Progressives Congress (APC) gubernatorial election primary in Ondo State, members of the State Working Committee of the party, has suspended the state chairman of the party, Hon. Isaac Kekemeke.

Kekemeke was suspended by the State Working Committee of the party for allegedly supporting and promoting one of the governorship aspirants ahead the August 27, primary.

To this end, a three-man disciplinary committee has been set up to investigate the entire allegation against the embattled chairman.

The SWC took the decision at an emergency meeting held in Akure, the state capital.

They also accused the party chairman of planning to “coarse” the delegates and some party leaders to support one of the aspirants, Dr Segun Abraham who is the anointed candidate of the national leader of the party, Senator Bola Tinubu.

In a communiqué issued and signed by over two-third members of the committee, ordered the deputy chairman, Mr Ade Adetimehin to be acting as the chairman of the party until further notice.

Some of the allegations against the chairman, according to the communiqué, include anti-party activities, romancing with the ruling party, misappropriation of party’s funds, extorting money from the governorship aspirants, non-commitment to party activities among other.

It further read, “The State chairman and his associates in crime had maliciously and wilfully doctored the Party ‘s delegates list of the state and injected names of those who never took part in any of the part’s congresses in order to overreach the helpless and vulnerable majority of the aspirants in the forthcoming primary in the state.

“Kekemeke and his cronies are more of PDP’s moles within the APC family which cannot lead the party to victory in the forthcoming governorship election.

“As a result of the reported allegation raised against the chairman, the house further resolved that he should step aside from his position as the state chairman and should surrender all the party’s properties in his possession for ease of proper investigation.”

Akinyelure, who spoke to reporters on phone, said nothing has changed, saying at the appropriate time the party would look into the matter.

Also, the embattled chairman, Kekemeke, said he still remains the authentic chairman of the party, saying only the National Executive Committee of the party has the legal power to remove him.

Kekemeke, who spoke to reporters at his residence in Akure, the state capital, said those aggrieved members, who signed his removal letters were angry just because he had not allowed them to loot the party’s treasury.

He said; “It means we have entered the second scene of the drama. I did say, it was a drama but that was act one, scene one. It appears to have moved to act two. If this people have within one week appointed two chairmen that showed it was a real drama.”
He adds that “My only fear is that I am beginning to suspect that there are fifth columnists that are trying to weaken the party and create imaginary divisions within the party so that they can go to another party.”