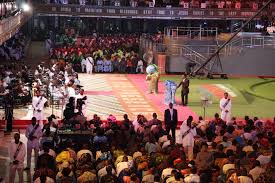 A total of 111 persons have so far been rescued in the ongoing search and rescue operations at the Synagogue Church of All Nations in Ikotun, Lagos where a Guest House belonging to the church collapsed yesterday with 17 persons confirmed dead as at 3:00p.m. Saturday.

Unofficial reports said over two scores death have been counted since the building collapsed 1:00p.m. Friday.

The rescue operations have now been joined by some Germans believed to have been drafted in by Pastor T.B. Joshua., founder of the Synagogue Church of All Nations.

Unconfirmed report stated that the church has brought some Germans into the country in chartered flights to carry out the search and rescue operations this morning.

Another story indicates that the Germans are church members who vounteered to join in the search and rescue efforts.

However, NEMA told our correspondent on Friday that uncooperative and hostile attitude of church officials was hindering rescue operations.

The collapsed building is a two-storey building Guest House under construction being upgraded into five-storey within the church premises.

NEMA spokesman in Lagos, Mr. Ibrahim Farinloye, informed that LASEMA however returned to the collapsed building site at about 12:15 a.m. Saturday after a deal was reached with the church.

“The Governor (Mr. Raji Fashola of Lagos) was expected to visit the site yesterday night, that was the reason for the return of the agencies,” he said, adding that the agencies left by 3:00a.m. when the governor did not come.

“NEMA, LASEMA and other agencies are returning to the scene in case they would be allowed to carry out their statutory functions,” NEMA said.