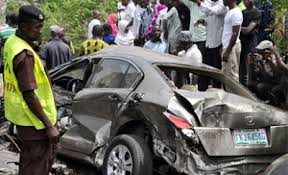 By Dipo Awojobi – Three persons, including a woman, on Thursday morning lost their lives, while 14 others sustained injuries in an accident that occurred at the Lagos end of the Lagos-Ibadan Expressway.

Akindele said the accident, involving a commercial bus with registration No. KRD 326 XG, and an articulated truck, occurred at about 5.36am.

He said officials of the emergency response team had to use light duty equipment to cut through to rescue some injured passengers trapped in the commercial vehicle.

According to him, the injured passengers and the truck driver were rushed down to the trauma centre for medical attention.

Akindele advised motorists against reckless driving, urging them to drive within the appropriate speed limits to avoid accidents.