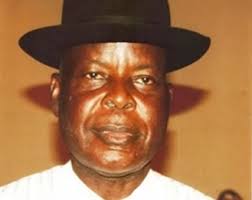 A jittery Chairman, Police Service Commission, Mike Okiro who has apparently failed in his threats, bl‎ack mail through hired agents on Tuesday sent his personal lawyer one Barr. Ayo Ademola and Anayo Okiro his younger brother to prevail on me to meet with him in his office so as to’ hear my own side of the story ‘ but with an apparent secret agenda to prevail on me to withdraw my petition and get back my job, a position I out rightly rejected and considered laughable.

The funny drama conceived in Okiro’s dining room saw his younger brother Anayo Okiro and his personal lawyer apparently falling over themselves to have me attend a meeting with Mr Okiro in his office to give me a fair hearing over my suspension since I was suspended without following any known public service procedure like a query first, a panel etc to hear me out.

Thinking I was dealing with a so called Knight, the meeting which held on the 8th floor of the Fed. Sec. Abuja office of PSC on 2/6/2015 by 2p.m, saw a jittery and shaken Okiro without prompting, said he has forgiven me as a son but will like me to retract the publications in the media and I should in turn forward a written apology to him in other to lift my suspension just as I should withdraw my petition from the anti-graft agencies.

A further funny looking and acting Okiro asked me to say yes or no to whether he has actually defrauded the PSC of the said money.

I stood with muted amusement knowingly and confirming my suspicions that Okiro was filming this drama to use it against me and will attempt to use it to clear himself without uttering a word.

All I could say to my boss was to read the contents of my petition‎, particularly the heading.

At this point sensing danger to my life in Okiro’s enclave, I muted to my lawyer to assure him that I will send the apology by the next day so as to escape the danger of his angry looking police escorts and get out of his office premises.

I maintain that I am fearless in this matter even though I was threatened by Mr. Okiro in his office, I want to pass a clear message to Nigerians that today I gave my written confirmation to ICPC who invited me where I confirmed   that I am the author of the petition and all the facts deposed to thereof are true and that the hoodwinked civil servants in PSC, coarsed to supply false information ‎about established facts and my person are likely to be charged as accomplices.