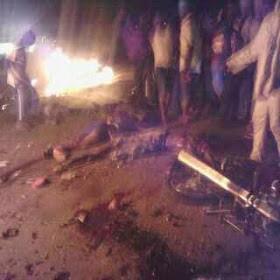 President Goodluck Jonathan has summoned an emergency security meeting following the last bomb blast that occurred in Nyanya, Abuja in which 9 persons died and 19 others injured.

According to him, the meeting is already going on at the Villa.

The latest explosion rocked Nyanya, at about 8.15 pm Thursday less than 50 metres away from the exact location of the earlier blasts that took place on April 14 at Nyanya bus terminal in Abuja killing 75 people and injured 200 others.

Meanwhile, Nigeria Police has put the official dead figure of victims of the Thursday night bomb blast that rocked Nyanya 12, saying 19 others were injured.

Force PRO, Frank Mba, told newsmen at the scene of the incident that 19 others were injured and were now receiving treatment at the various hospitals in the city.

Mr. Mba, however said that the casualty figure is “provisional” adding that investigation into the explosion had already began.

Inspector General of Police, Mr. Mohammed Abubakar was among top security officials who earlier visited the scene of the explosion to assess the situation.

Witnesses said that the incident occurred from a Volkswagen golf car which drove from the Keffi end of the road and exploded just about 50 metres away from the scene of the April 14 blast.

Two additional security check-points have been set up between Mararaba and Nyanya.