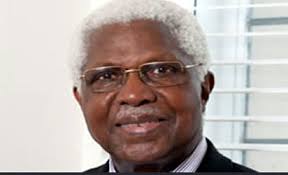 Dr. Ekwueme died in London after unsuccessful battle with a complicated chest infection.

The second Republic Vice-President who died at 83, hails from Oko community, in Orumba  council area of Anambra state, was the Vice to the 2nd Republic president of Nigeria, Shehu Shagari.

The deceased, it would be recalled, was first admitted into an Enugu private hospital, Memfys Neurosurgery after he slumped in his Enugu residence.

Dr. Ekwueme, who was a former member of the People’s Democratic Party,  PDP Board of Trustee (BOT) , later went  into coma at the Enugu hospital, before being flown abroad last week in an air ambulance provided by the federal government.

His demise was announced on Sunday in a  statement signed by his younger brother and the traditional ruler of Oko community, Igwe Professor  Laz Ekwueme.

The statement said the elder statesman passed on by 10:00pm in a London hospital on  Sunday.

“Ekwueme family regrets to announce the peaceful passing away of their patriarch, the former Vice-President of the Federal Republic of Nigeria Dr Alex Ifeanyichukwu Ekwueme GCON,” it said.