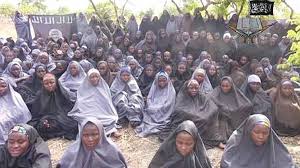 By Dipo Awojobi – Inspite of the general optimism that the Chibok schoolgirls could still be found, former President Olusegun Obasanjo has said that the girls may never be found.

Speaking on Friday night at the Obafemi Awolowo University, Ile-Ife, Staff Club, during an interview with journalists, Obasanjo blamed the disappearance of the girls on the attitude of the former president Goodluck Jonathan, under whose government they were kidnapped by the insurgent group, Boko Haram, in April 2014.

Obasanjo’s latest assertion is a departure from his earlier opinion that some of the girls would never return.
Obasanjo’s remark is coming two months to the second anniversary of the kidnap of the Chibok school girls.

It will be recalled that President Muhammadu Buhari said on Wednesday in a speech at the European Union parliament in Strasbourg, France, that his government would not rest until the about 219 schoolgirls in Boko Haram captivity were rescued alive.

About 300 female students of Government Girls Secondary School, Chibok, in Borno State, were abducted in their hostel by Boko Haram on April 14, 2014, as they prepared to sit the Senior School Certificate Examination. It was Nigeria’s worst kidnap incident. Nearly 70 of them later escaped, but about 219 remain in terrorist captivity.

“In a recent meeting I had with parents of the Chibok Girls, I assured them that government would not rest until all the girls are rescued alive and reunited with their families,” Buhari told the European parliament, adding, “I remain fully committed to this pledge.”

But Obasanjo said on Friday regarding the Chibok schoolgirls, “Nobody can bring back the girls for they are nowhere to be found.”

He stressed, “Seventy-two hours after the Chibok girls were abducted was too late for their rescue, talk less getting to two years by April.

“So if any leader is promising bringing back of Chibok girls to Nigeria, he is lying.”

Obasanjo said most of the girls would have died, while those alive would have been forced into marriages or consigned to sexual violence and human trafficking.

Obasanjo was in Ile-Ife for the “7th Roundtable with Chief Olusegun Obasanjo,” organised by the OAU Staff Club, with the theme, “Reflections of an Elder Statesman: An Evening with OBJ.” The event was chaired by the former Vice Chancellor of the University of Uyo, Professor Fola Lasisi, and it was attended by the Vice Chancellor of OAU, Professor Bamitale Omole, among others.

During the question and answer session, Obasanjo declined to answers questions he viewed as insulting.

A Professor of Biology of the institution had asked Obasanjo to explain why he refused to release funds to the National Assembly when he was president.

“You don’t know so many things that transpired during my administration and so many things were not resolved, so don’t attack my intelligence and personality,” Obasanjo responded angrily.

“You have to get your hands dirty and your feet wet in politics before you can make it. So, I admonish you (students) to work hard in order to gain ground and not rely on godfatherism because I never had any godfather,” he said.

During the interaction which lasted for about two hours, Obasanjo also delved into the unending tirades between him and Nobel Laureate, Professor Wole Soyinka, noting that he had issues with the respected scholar.

“I will trust Wole Soyinka as an “aparo (guinea-fowl) hunter” rather than trust him as a political analyst,” he maintained.