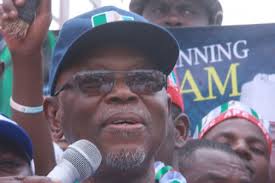 By Tom Garba, Yola – A member of Adamawa State House of Assembly, Lusamani Dilli, said the All Progressive Congress (APC) would lose re-run National Assembly election in Numan, Lamurde and Demsa Federal constituency of the state because of lack of performance.

Dilli, who is the deputy minority leader in the state said despite huge successes recorded by All Progressives Congress (APC) in the last elections in Adamawa state,  the APC will never win in the forth coming bye election saying, it is clear that the party did not perform anything tangible to win the votes of his people in the forth coming election.

The Appeal court in Abuja had ordered a rerun after disqualify Barr. Kwamati Laori of SDP on ground that his party did not conduct any primaries and the entire process done by his party to make him a substantive Legislature in the national Assembly was totally faulty.

The deputy minority leader maintained that they will remain an opposition party to the core in his own constituency to act as check and balance to the ruling party in the state in line the tenet of true democracy.

Lusamani also debunked rumor that People Democratic party (PDP) members in the state have decamped to APC for greener pastures.

“I want to tell you that there is no such a thing happen in my own area, is just an attempt to create an unnecessary political tension. Besides what it is that APC done that will warrant my people to decamp in the zone, they have nothing to show in my own area that will even make them to win in this coming rerun election” Dilli said

He further said that he is not unmindful of his role as a lawmaker send by his people to represent their interest, adding that he currently has two relevant bills awaiting passage that will benefits the people of the state.

He maintained his resolve to stand by PDP and mobilise all his people to massively vote for PDP in the forth coming rerun election.