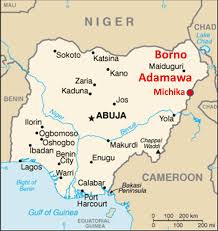 Kamwe who are better known as Michika people of Adamawa State, North East Nigeria celebrated their cultural day first time after the town was recaptured by Nigerian Army. The town was until recently over ran by Boko Haram.

The celebration was characterised by a Book presentation entitled: “Kamwe People of Northern Nigeria : Origin, History and Culture ” authored by a London based son of the soil, Barr Iliya Yame Kwache.

Thousands of their sons and daughters graced the occasion to thank God for making them to returned to their homes of origin which they deserted it for more than one year and half because of the attacks of Boko Haram.

One of the prominent Son of the land and the special guest of honor of the occasion,Mr Boni Haruna who was presented by Hon. Salisu Gogura, call on the people of Kamwe to unite irrespective of political, religion and party affiliation.

The Book Reviewer,Dr Samuel I Gogura described the author of the book as Courageous,daring and humble Man who has a great inspiration to show case Kamwe in the eyes of the world.

Another prominent Man who spoke at the book presentation is Catholic Bishop of Adamawa State, Bishop (Dr) Dami Mamza where he blamed Michika Politicians to have caused a serious disunity in the Land.

“Michika Politicians are our major problem, if we are one nobody will divide us, if we are one our voice must be heard, we will have been better more than this, we must be united”.

He warned politicians of the area who do not have people mandate and support the declined any post given to them as it is one of the problem that cause a serious division in the land.