I am not a lawyer, and so, I cannot not speak with authority on issues of law. But there are certain issues that are so plain and clear that even when lawyers with expert knowledge are divided, as a layman you know those that are being objective and the ones that are subjective and only taking their positions based on sentiments or where their interests lie. 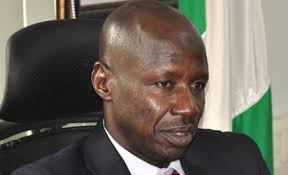 On the issue of Ibrahim Magu, the argument of legal pundits who have contended that he cannot continue to act as the Economic and Financial Crimes Commission (EFCC) Chairman, after his repeated rejection by the Senate which is the confirming authority, by the law establishing the anti-corruption agency, makes more sense to me.

Section 2(3) of the EFCC Act provides that “The Chairman and members of the Commission other than ex-officio members shall be appointed by the President and the appointment shall be subject to the confirmation of the Senate.’’

The question therefore is: Of what relevance is section 2(3) of the EFCC Act If the nominee of the President for the position of the EFCC Chairman can continue to act indefinitely, against Senate refusal to grant his confirmation?

The different Acts of the various agencies, parastatals, commissions and bodies of government have the mode of appointments of their respective heads and other top officials clearly spelt out. While some require the confirmation of Senate to become effective, many do not need such parliamentary approval to have legal force and effect after the appointment has been made by the President.

A Lagos lawyer, Sylva Ogwemoh (SAN) was reported to have said: “The power of the President of the Federal Republic of Nigeria under the Economic and Financial Crimes Commission (Establishment) Act, to appoint a Chairman for the EFCC is not absolute. The President’s appointment is subject to confirmation by the Senate of the Federal Republic of Nigeria.

“What this means in effect is that the President cannot under any circumstance act alone in the appointment of a Chairman for the EFCC, without the confirmation of the Senate, and where the Senate has refused confirmation as in the case of Magu, that matter ends there.”

On the other hand, another Lagos-based lawyer, Femi Falana (SAN) said: “With profound respect, in sending the letter to the senate for confirmation, the president relied on section 2 subsection 3 of the EFCC Act but that section has to be read subject to the constitution. So if you do that, section 171 takes precedence over section 2 subsection 3 of the EFCC Act. So does the president need to ask for confirmation? No.”

In 2008, a social crusader and legal practitioner, Festus Keyamo, had instituted a case challenging the practice of appointing military chiefs (Chief of Army Staff, Chief of Naval and Chief of Air Staff) by the President without recourse to the National Assembly, contrary to the provisions of Section 18 (1 and 2) of the Armed Forces Act.

According to reports, “Keyamo had argued in court that the appointments of service chiefs, which are political appointments, could not be different from other political appointments that require the confirmation of the National Assembly such as the Chief Justice of Nigeria, Justices of the Supreme Court and Court of Appeal, Chairman of the Economic and Financial Crimes Commission (EFCC), ministers, and so on.”

While delivering judgment in the Keyamo’s suit in 2013, Justice Adamu Bello of the Federal High Court Abuja (now retired) had reportedly declared the appointments of the service chiefs without approval of the legislature as null and void because they were at variance with Section 18 (1) and (2) of the Armed Forces Act.

The court was also reported to have ruled that “Section 18 (1) & (2) of the Armed Forces Act, Cap. A.20, Laws of the Federation of Nigeria, 2004, is in conformity with the provisions of the 1999 Constitution and do not fall within the category of existing laws under Section 315 (2) of the constitution which any sitting President may by an order, modify its text to bring it into conformity with the provisions of the constitution.”

Today, some eminent lawyers in the likes of Mr. Falana who had hailed the said judgement and commended Keyamo for the great feat are saying President Muhammadu Buhari does not need to send Magu’s name to the Senate for confirmation. With due respect to the highly revered human rights activist, here was his remark as published in Vanguard of July 2, 2013, in reaction to the said verdict of the High Court on service chiefs which has not been upturned till date: “The judgement is sound and it is commendable on the part of the plaintiff, my learned friend, Mr Festus Keyamo. The judgment has gone a long way to challenge the culture of impunity in our country, and it is also a challenge to the Senate to insist on full compliance with the provision of the constitution, with respect to its powers to screen candidates for the position of service chiefs. This is not one of the cases that should be appealed by the government.”

Well, the good thing is that President Muhammadu Buhari knows Senate approval of the appointment of EFCC Chairman cannot be ignored. Hence, his decision to set up a committee headed by Vice President Yemi Osinbajo to liaise with the Senate, perhaps, with a view to resolving the issues raised against Magu by the DSS which, to a large extent, formed the basis of his rejection.

No doubt, Magu is fit for the job. He has performed excellently in acting capacity. He has shown great zeal for the anti-corruption war. Nonetheless, the law must be followed to formalize his appointment. If the Presidency cannot prevail on the Senate to reverse Magu’s rejection, the appropriate step to take is to send a replacement. Those setting the stage for war and urging the Presidency to exert all its strength to bring down the Senate do not mean well for Buhari’s government.