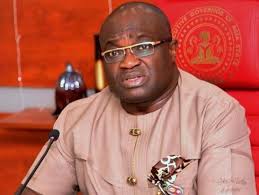 By Sadiq Umar – The Court of Appeal sitting in Abuja has upheld the election of Governor Okezie Ikpeazu as governor of Abia State, setting aside the June 27 which sacked him from the position.

The Appeal Court, comprising of a five-member panel led by Justice Morenikeji Ogunwumiju dismissed the earlier judgment by Justice Okon Abang of the Federal High Court that sacked Ikpeazu, describing it as “a rape of democracy.”

Justice Abang, Abuja, had in a case instituted by Uche Ogah of the Peoples Democratic Party annulled the governor’s election and asked the Independent National Electoral Commission to recognise the applicant as governor of the state.

Abang had ruled that Ikpeazu was guilty of tax evasion and therefore not qualified to contest the April 11, 2015 governorship election in the state.

But in its judgements on the Appeal appeals by Ikpeazu, Ogah, PDP and Friday Nwosu, the Justice Ogunwumiju led appeal panel faulted the technicalities to which Abang arrived at his judgement.

The Judge said Abang deliberately ignored examining the tax documents which were tendered to his court as exhibits.

Justice Ogunwumiju also said the judge “deliberately stood the law on its head” by justifying jurisdiction to entertain the motion when appeal had been filed.

“It is my humble view that his lordship committed great violence against one of the pillars of our criminal justice. Judges don’t work at the tax office or know how they issue receipts and clearances.”

Adding that, “after reading his (Abang) judgment several times I was struck with amazement, in the circumstances brought before his lordship, he could throw about such loaded words as forging and then turn around to find out there is no forgery or fraud in the tax documents.”

The judge stated further that it would be a “rape” on democracy to remove Ikpeazu as governor. “That cannot be justice in the circumstances of this case,” it declared.