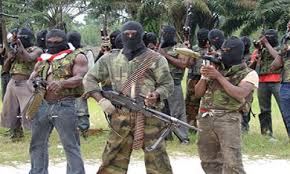 Avengers’ spokesperson, Mudoch Agbinibo in a statement on its website said if President Muhammadu Buhari failed to restructure the country before October 1, the group would declare a republic.

Agbinibo said the Buhari’s led government had failed Nigerians as policies executed by his government had been misdirected.
He stated that the group was praying for Buhari to find oil in the northern Nigeria in commercial quantity.

“The October 1st declaration of independence is still sacrosanct if the Nigeria government fails to retrace its step by restructuring this country.

“Our prayer for Buhari and the Northern hypocrite (Northern Governors) is that oil should be found in commercial quantity in the North, so they can let the Niger Delta go.

“The Buhari-led government has failed Nigerians with their misdirected policies that has divided the country, as such, nobody wants to be part of that failed state not even the Niger Delta.

“We want to warn the general public that those using NDA to defraud people, days of reckoning is close,” he said