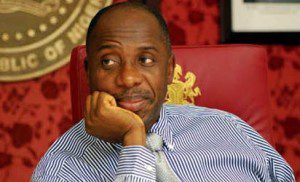 The All Progressive Congress, Rivers state chapter has alleged an assassination attempt on the State Governor, Rotimi Amechi.

In a statement issued Thursday, Rivers APC Chairman, Dr. Davies Ibiamu Ikanya said, some unidentified gunmen  had  blocked the exit route of the governor’s convoy while others  tried advancing  towards the governor  as he addresses  some supporters of All Progressives Congress(APC), where he had gone for a door-to-door campaign in Obio/Akpor.

He further explained that as the Gun Men exchanged fire with the Governor’s security detail, Governor Amechi was shielded to safety and did not sustain any injury.

Dr Ikanya said, “The attempt took place on Thursday at the Rumuolumeni area of Port Harcourt, the State capital. The attempt to kill Amaechi was made by some unidentified gun-wielding youths who had first blocked the exit route of the governor’s convoy. As the suspected killers advanced to where Amaechi was addressing supporters of All Progressives Congress, APC, where he had gone for the final leg of the part’s door-to-door campaign in Obio/Akpor, the governor’s security details returned fire. Amaechi was shielded by his security personnel to safety. He, however, was not hurt.”

Similarly, the Ikwere Local Government Caretaker Committee Chairman, Mr. Amadi Wabueze has also raised alarm over threat to his life, saying he miraculously escaped death Thursday as a group of policemen had invaded his residence in Aluu and fired gun shots at his gate.

Narrating his ordeal, he explained that it was just some few minutes after he left his apartment that he heard the gunshots from afar but was told by Villagers not to return as the police men had gained entrance into his residence, searching and asking for his whereabouts; “I was told not to go back because a Hilux van loaded with policemen was at my gate”, he added

He further said, “As we speak, they are still there shooting and scaring people away.  They said they were looking for the CTC chairman and that they want to get him arrested. We have done nothing wrong other than being members of all progressive congress.”