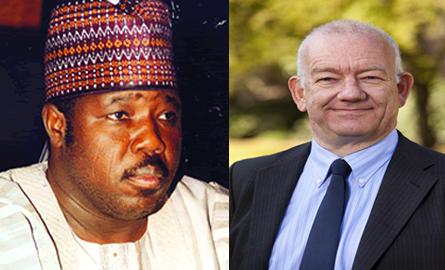 In an interview on Arise Television last week, Davis, who is one of the international negotiators employed by Nigerian government to secure the release of the 219 girls abducted by Boko Haram members in Chibok, Borno State named Sheriff and a former Chief of Army Staff, General Azubuike Ihejierika, as financiers of the sect.
But Sheriff at a press briefing in Abuja Wednesday, the former governor described the allegations as callous and unwarranted, adding that those linking him with Boko Haram are doing so for political reasons.”I condole with the people of Borno, particularly the people of Bama, Gwoza and Gamboru over the recent attacks.

“My name has been mentioned for political reasons over the attacks of Boko Haram. I have been accused unfairly in connection with Boko Haram since I left office.

“For the records, let me state categorically that I do not share the same ideology with Boko Haram. By my nature, I am opposed to the philosophy of Boko Haram.

“I will sue the Australian. I have instructed my lawyers to sue the faceless Australian.”

Sheriff accused the Australian negotiator of failing to offer the federal government the necessary information about Boko Haram especially as it relates to the abducted girls, but rather chose to sneak out of the country to make false claims.

“It is instructive to point out that I have been one of the greatest victims of Boko Haram. I was a target of Boko Haram during my time because I refused to abdicate my responsibility.

“Among those killed by Boko Haram was my younger brother, Alhaji Goni. Some of my friends and associates were killed in cold blood by Boko Haram.”

The former governor also reminded his accusers that Boko Haram founder, Mohammed Yusuf once threatened to attack the late President Umara Yar’Adua and some other eminent Nigerians before he outlawed the sect in the state.

For the records, the late leader of Boko Haram, Mohammed Yusuf, once named me, Umaru Yar’Adua and some other leaders as targets. He boasted he would deal with all of us.

“I banned Boko Haram. I was the one who made a law that outlawed the group.

“The sect later changed its name. And in spite of our efforts, the group continued to wreak havoc.

“The sect has become captive of political forces and has been used for settling political scores.”

Sheriff insisted he had no dealing with Boko Haram or any other terror group.

“I have no association with any terrorists anywhere. I have never met the group. I cannot be a sponsor of a group I have not met before,” he said.

He also acknowledged that he was recently invited by the State Security Service (SSS) but it had nothing to do with Boko Haram.

“I am prepared to face any panel in the world to clear my name of Boko Haram,” he added.