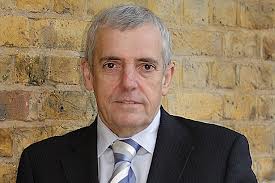 Parker who flew into the county aboard an American Airline, Delta Air Lines, sources said, took ill while onboard.

The plane had arrived the country from Atlanta, Georgia, around 4pm yesterday.

A source close to the airport confirmed that the medical personnel attached to the terminal tried to revive him, but without success.

When it was confirmed that he had passed on, an ambulance was ordered to take him to the morgue.

At the time of filing this report, the identity of the morgue where he was taken to could not be confirmed.

Another account indicated that the diplomat, before dying, was seen clutching his chest and screaming “my heart” before slumping before the health officials could reach him.

Peter Leslie Carter was born 19 November 1956) is a British diplomat who is currently British Deputy High Commissioner in Lagos, Nigeria. He was Her Britannic Majesty’s Ambassador to the Republic of Estonia 2007–2012.Carter was educated at The Skinners’ School in Tunbridge Wells, Kent, and attended New College, Oxford, where he studied Modern Languages. He then worked for Arthur Andersenbefore moving to Italy, where he became a language teacher. In 1984, he joined HM Diplomatic Service with postings at the Foreign and Commonwealth Office in London and New Delhi, and in 1996 went to Brussels, where he became responsible for the EU‘s Middle East policy. He returned to London in 1998, where he negotiated the deal between North Korea and the United Kingdom which established diplomatic relations between the two countries. In 2001.