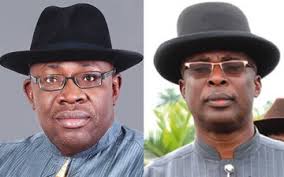 By Jackson Udeani – The Independent National Electoral Commission (INEC) has suspended the declaration of the final result of Saturday Governorship Election in Bayelsa, even as it announced the cancellation of the elections in Southern Ijaw local government area of the state.

The Governor of the State and People’s Democratic Party (PDP) candidate, Hon. Seriake Dickson, hailed the decision saying it was the right thing to do giving the violence that engulfed the area during the exercise.

However, the All Progressive Congress (APC) candidate, Timipreye Sylva, Dickson’s main rival faulted INEC, claiming that he was already winning in the area.

INEC decided to cancel the election over alleged wide-spread irregularities and security challenges in the Southern Ijaw local government area where election was held on Sunday.

Dickson with the result of the seven out of the State LGAs collated was far ahead with a total of 105, 748 votes while Silva has a total of 72,594 votes.

Prof Akpagu indicated that as he made the announcement, the result of the last Local Government – Southern Ijaw, has not been received.

He pointed out that the LG has a total of 120, 827 registered voters. He therefore declared in the view of the prevailing circumstance, he as the poll Returning Officer, could not make the final announcement, nor return the result.

It would be recalled the election in Southern Ijaw was shifted till Sunday, December 6, due to report of widespread of violence and disturbance of public peace.

Akpagu who briefed newsmen said report reaching the electoral body indicated that the rescheduled election in the Southern Ijaw was marred with violence and failed to comply substantially with the Electoral Act.

He stated that there were reports of shooting, ballot box snatching and stuffing among other electoral malpractices.

In view of this, the REC announced that the INEC would communicate the date of rescheduled poll in due course.