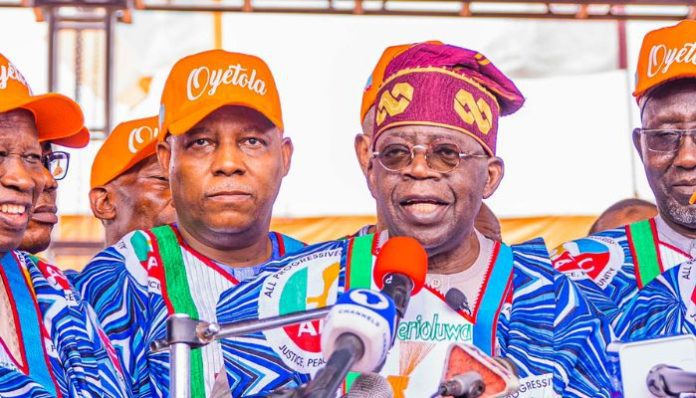 News Investigators/ The Presidential flagbearer of the All Progressives Congress (APC), Ahmed Bola Tinubu, has promised to establish a National Agricultural Commodity Directorate to reposition the agricultural sector for optimal growth, if elected.

Mr Tinubu said that the directorate would be charged with responsibility of providing required farming implements to farmers at subsidised rates.

The APC Presidential flagbearer made the promise during a town hall meeting with farmers and northern agro commodity groups on Monday in Minna.

He explained that the farming implements would be made available at government controlled prices across the 774 local government areas of the country.
The APC presidential candidate also promised that his administration would commence commodity exchange on assumption of office and would also ensure the full protection of farmers and their produce.
“Be assured that you will have all the necessary protection in the market and farms.
“That is why we promise you that commodity exchange will start immediately if you elect me as President of Nigeria,” he said
Mr Tinubu also promise to revamp the Bank of Agriculture to attend to farmers on a priority basis while pledging to ensure the mitigation of effect of climate change.
“We will stop destroying our export potential to create value, we will work to give you the exportable items that will help you produce in a manner that other people will want to buy your produce and not reject your produce.
”We promise you that nothing you produce will be destroyed again.
”I sympathise with all of you affected by flood throughout the country.”he said.
In his remarked, governor of Niger State, Abubakar Bello, said that government had over the years continued to support the development of agriculture in crop, livestock and fisheries production.
He noted that the present administration had reactivated some of the 19 moribund irrigation schemes in the state as well the rehabilitation of over 300km rural access roads through the implementation of the Rural Access and Mobility Project (RAMP II) programme.
Mr Bello said the state had attracted five International investors for the production diary and other associated livestock products.
He added that government had developed more than 1,300 hectares of pasture plots with basic facilities for the project.
The event was attended by the national chairman of the APC, Abdullahi Adamu, Director-General of the presidential campaign council, Gov Simon Lalong of Plateau, Gov Abubakar Bagudu of Kebbi among others dignitaries. -NAN