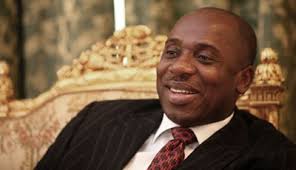 The election of Dr. Dakuku Peterside as the flag-bearer of the All Progressives Congress (APC) for the 2015 gubernatorial election in Rivers State has been described by Rivers APC as a divine mandate.

In a statement by Media aide to its Chairman, Mr. Eze Chukwuemeka, the party said, “With the election of Dr. Peterside as our flag-bearer we are now more convinced that we shall set up the next government come May 2015. This is a man whose love for the emancipation and development of Rivers State is infectious as demonstrated by his past records, particularly when he was the Commissioner for Works; most of the gigantic and mind-blowing roads in Rivers State were executed under his watch. For him to have vowed to follow the footsteps of our outgoing Governor, Rt. Hon. Chibuike Amaechi, is heart-warming.”

Rivers APC in a statement issued in Port Harcourt by the State Chairman, Dr. Davies Ibiamu Ikanya, advised the crisis-ridden PDP to prepare for thorough beating in the 2015 governorship election. “I congratulate our delegates that saw to the election of this great mind to carry our banner in our resolve to salvage Rivers State and our people from selfish politicians whose stock-in-trade is to loot our common patrimony and initiate our people into occult societies alien to our culture and belief as God-fearing State,” Ikanya said. “I urge all and sundry to obtain their Permanent Voters’ Cards (PVCs) to ensure that we collectively punish and bury PDP formally next February. I congratulate Dr. Peterside on his emergence and wish to assure him that we shall work day and night to ensure a landslide victory for him and our great party during the 2015 polls.”

The Rivers APC Chairman commended Peterside for hitting the ground running by setting out his vision for Rivers State immediately after his emergence as the party’s consensus candidate for the 2015 governorship election. “We are happy about our great candidate’s promise to provide a leadership that will accelerate the actualisation of a greater Rivers dream of improved middle class, first class safe environment, equal and more socio-economic opportunities and create a greater sense of community, a Rivers State that will be the pride of Africa. We also wish to commend his humility in extending a hand of fellowship to Most Distinguished Senator Magnus Abe and Engr. Tele Ikuru, our amiable Deputy Governor, who are also very qualified to be our flag-bearer in their own rights but who, as good party men, have graciously accepted the party’s decision in the greater interest of our dear State. We are convinced with all hands on deck, victory is assured,” Ikanya stated.

River APC equally commended Governor Amaechi for the strategic role he played in ensuring Peterside’s emergence as the party’s governorship candidate and for saving Rivers State the sum of N12 billion that the vindictive PDP-led Federal Government would have deducted from Rivers’ treasury to pay Abia State after ceding Rivers’ oil wells in Etche to Abia. “The wickedness of the PDP-led Federal Government against Rivers State has made our task easier as we do not need to labour to convince our people that PDP is evil, that it does not mean well for Rivers State and her people and should, therefore, not be allowed anywhere near the Brick House. We heartily rejoice with our ever-reliable Governor, who has once more proved to be a worthy and visionary political warrior,” Ikanya said.

He commended the APC National Electoral Committee led by Prince Austin Eweka for doing a great job in conducting the peaceful, transparent and generally accepted governorship primary election that produced Peterside as the party’s candidate for the 2015 polls. He also commended Rivers APC stakeholders for approving and granting automatic tickets to all incumbent State House of Assembly members “for demonstrating their love and protection of our democracy which PDP would have truncated in its futile efforts to impeach our God-given Governor for resolutely defending and protecting our common interest.”