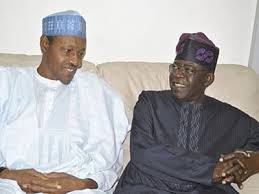 The All Progressive Congress (APC) said two of its chieftains Mr. Bola Tinubu, Vice President Prof. Yemi Osibanjo and party’s pioneer chairman, Bisi Akande were absent at its National Executive Committee (NEC) Friday because they are not under obligation to attend since the duo are not NEC members.

National Publicity Secretary, Mr. Lai Mohammed told journalists after the meeting that although Tinubu can attend the party’s NEC if he chooses to do so, he reserves the right to exercise that discretion to attend or not to.

Tinubu, former National Chairman of APC, Mr. Bisi Akande,Vice President Yemi Osibajo and others were not in attendance at the NEC meeting, thus fuelling speculations that the crisis of confidence among top APC members had escalated.

Tinubu’s elements within the party have been on the spotlight over their insistence that party should enforce its supremacy especially in the election of leadership of National Assembly.

Sources, however, said their absence was not because they were aggrieved over alleged gang-up against them by the old PDP elements that truncated party position to produce Bukola Saraki and Yakubu Dograra leadership of the National Assembly.

President Muhammadu Buhari is believed in some quarters to be tactically in support of Saraki and Dogara, because the president had insisted he would work with anyone that emerged as President of the Senate and Speaker of the House of Representatives irrespective of party position.

Buhari in his speech during the meeting tactfully told the Saraki and Dogara group within APC to fall in line with the party while submitting themselves to the authorities of the APC.

Reinforcing Mohammed’s position, a party stalwart said Tinubu and others who did not turn up for the meeting have never been members of the NEC, according to the party’s constitution.

One of them said although they were free to attend NEC meetings of their party on personal interests, they were not duty bound to attend because they are not members of NEC.

The party elder disclosed that Tinubu and Akande are rather members of the APC Board of Trustees, which the party inaugurated at the end of its NEC meeting today.

There are reports that members of the Saraki group were not too pleased with the outcome of the NEC meeting, amid reports that the emphasis on party Supremacy by Buhari was specifically targeted at them.

As at the time of filing this report, some National Assembly members led by Saraki are holding a meeting at the Imo State government’s lodge with the state governor, Rochas Okorocha in attendance.

The meeting, said to have been convened by Okorocha was part of moves by APC to reconcile the Saraki group with the main stream party in line with the desire of President Buhari.

The APC caucus in the Senate is said to have also scheduled a meeting at the National Assembly to review the outcome of the NEC meeting.