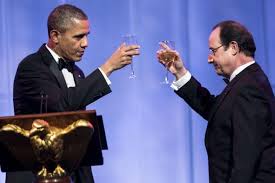 A press release issued by Wikileaks on Tuesday announced the commencement of its publication of series of top secret intelligent reports gathered by US on the presidents of France since 1995 till date.

According to the release, “Today, 23 June 2015, WikiLeaks began publishing “Espionnage Élysée”, a collection of TOP SECRET intelligence reports and technical documents from the US National Security Agency (NSA) concerning targeting and signals intelligence intercepts of the communications of high-level officials from successive French governments over the last ten years.

The top secret documents derive from directly targeted NSA surveillance of the communications of French Presidents Francois Hollande (2012–present), Nicolas Sarkozy (2007–2012), and Jacques Chirac (1995–2007), as well as French cabinet ministers and the French Ambassador to the United States. The documents also contain the “selectors” from the target list, detailing the cell phone numbers of numerous officials in the Elysee up to and including the direct cell phone of the President.

Prominent within the top secret cache of documents are intelligence summaries of conversations between French government officials concerning some of the most pressing issues facing France and the international community, including the global financial crisis, the Greek debt crisis, the leadership and future of the European Union, the relationship between the Hollande administration and the German government of Angela Merkel, French efforts to determine the make-up of the executive staff of the United Nations, French involvement in the conflict in Palestine and a dispute between the French and US governments over US spying on France.

A founding member state of the European Union and one of the five permanent members of the UN Security Council, France is formally a close ally of the United States, and plays a key role in a number of US-associated international institutions, including the Group of 7 (G7), the North Atlantic Treaty Organization (NATO) and the World Trade Organization (WTO).

The revelation of the extent of US spying against French leaders and diplomats echoes a previous disclosure in the German press concerning US spying on the communications of German Chancellor Angela Merkel and other German officials. That disclosure provoked a political scandal in Germany, eventuating in an official inquiry into German intelligence co-operation with the United States, which is still ongoing.

While the German disclosures focused on the isolated fact that senior officials were targeted by US intelligence, WikiLeaks’ publication today provides much greater insight into US spying on its allies, including the actual content of intelligence products deriving from the intercepts, showing how the US spies on the phone calls of French leaders and ministers for political, economic and diplomatic intelligence.

WikiLeaks founder Julian Assange said: “The French people have a right to know that their elected government is subject to hostile surveillance from a supposed ally. We are proud of our work with leading French publishers Liberation and Mediapart to bring this story to light. French readers can expect more timely and important revelations in the near future.”