For the embattled Bureau Chief of Vanguard Newspapers based in Kaduna, Luka Binniyat, the road to freedom remains momentarily illusive after a Kaduna High Court imposed stringent conditions for his bail. VICTOR BUORO reports on the travail of a journalist imprisoned for doing his job 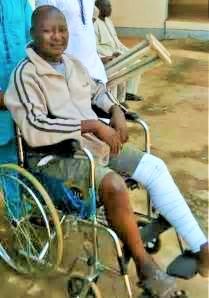 Dating back to the military era, journalism practice in the country has been exciting and worthwhile, especially in Kaduna State. Though there have been recorded cases of friction with different administrations, the relationship between the government and the media has always been cordial over the years. That was before the coming on board of Malam Nasir Ahmed el-Rufai as Governor of Kaduna State on May 29, 2015. Famed for his combustive disposition and sometimes outburst that attract media focus, el-Rufai would always be a source of media attention.

Presently, the strain in the relationship between the media and Governor el-Rufai seems threatening, with one of the reporters, Luka Binniyat, thrown behind bars and stringent conditions imposed for his bail. Still counting, there are about four different arrests, detention and court cases recorded against some journalists plying their trade in the state during the barely 26 months reign of el-Rufai as governor.

The latest unhealthy engagement between the state government and members of the fourth estate of the realm is the present travail suffered by Binniyat.

According to a top source, even before now, there has been no love lost between Luka Binniyat and the hard stance exhibited by Governor el-Rufai over his intolerance for criticisms. Binniyat, a bold writer known for reporting it as it happens, reported a statement credited to el-Rufai where the governor was quoted to have dared his critics to climb the popular Kufena hill and jump to their end for all he cares. The report generated so much controversy with different interpretations coming from official working in the Kaduna State Governor’s office.

When el-Rufai reportedly told a select group of journalists in the heat of the Southern Kaduna crises that his government had paid some foreign Fulani herdsmen to stop the perceived retaliatory killings in the area, the state government initially denied it. The story angle Binniyat reported was believed to have seriously irked the government, principally because Binniyat was not among the privileged few invited for the briefing. Later publication of the full transcription of the interview was later to prove that the former Vanguard Bureau Chief was right in his report.

Apparently, Binniyat’s incisive reportage may have earned him a ‘valued’ place in the government’s popular black book and concerned colleagues say it marked the beginning of the plot by the government to unleash its brimming venom on him. Towards this end, the el-Rufai-led government planned and waited for the slightest opportunity to strike and avenge for the perceived sins of journalist Binniyat and the opportunity came with a report that alleged that five students from the College of Education, Gidan-Waya were sent to their early graves by some gun-wielding herdsmen.

His initial invitation by the Department of Security Services, (DSS), did not therefore come as a surprise to many. After being interrogated for hours, the DSS later handed Binniyat over to the Police and was hurriedly arraigned before a Magistrate Court and remanded in prison custody same day. Going by what looked like a scripted play, the State government thereafter withdrew the case from the Chief Magistrate Court 1, after first arraigning and remanding Luka in prison custody before meeting his bail conditions.

Giving impetus to the public perception to the Binniyat saga in the hands of the Kaduna State government, the Kaduna State Director of Public Prosecution (DPP), who is also counsel to State government, Barrister Bayero Dari, told journalists that it was at government’s request that charges be filed before the High Court. With the First Information Report (FIR) at the Magistrate Court withdrawn, a fresh two-count charge was then filed before a Kaduna High Court.

Dragged to the High Court on a two-count charge over the publication in Vanguard Newspapers of January 22, 2017 on the alleged killings of five students of College of Education, Gidan-Waya, Binniyat is also facing charges on breach of public peace and injurious falsehood punishable under sections 114 and 393 of the penal code laws of Kaduna State.

Binniyat, who is receiving medical treatment for injuries he sustained from an accident, had walked into the Court room with the help of crutches to enter his appearance only to be remanded in prison custody. On Thursday, July 20, 2017, many that were in court had hoped that having already spent about two weeks in prison custody; Binniyat would be granted liberal bail conditions. But the story was different with Justice Bashir Sukola reeling out what Binniyat’s lead counsel, Barrister Alex Marama and others friends of the court described as evidently stringent bail conditions, considering the charges brought against the defendant.

The conditions include providing two sureties, who are to deposit their international passports with the Court, N10m each and a bank bond on that amount pending the hearing and determination of the case.

Speaking on the stringent bail conditions, a Kaduna based lawyer and Human Rights advocate, Barrister Festus Okoye said even if a journalist committed a criminal offence that is bailable, the court should not make it look as if it is convicting the journalist without trial by imposing outrageous bail conditions.

Already, the lead counsel to the detained reporter, Barrister Marama, has indicated the defence team’s intention to appeal the stringent bail conditions to enable his client regain freedom. Similarly, the Nigeria Union of Journalists (NUJ), and most practitioners see the harsh bail conditions as clearly punitive and meant to break the spirit of the defendant. Interestingly, while all the drama unfolds, Vanguard newspapers that was the main beneficiary of the published story for which Binniyat is currently being persecuted, has remained silent on the matter.

While pressure is being mounted on Binniyat from unexpected quarters to apologise over the story, sources close to him say the detained reporter is adamant and holding on to the ethics of his cherished profession.

In the meantime, an official of government from Southern Kaduna (names withheld) may have been commissioned to sell a difficult message of trying to convince people that the travails of Binniyat is unconnected with Southern Kaduna. Unfortunately, not even school children have listened to such tales talk more of being convinced.