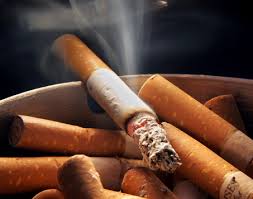 The Senate on Tuesday, passed into law, the National Tobacco Control Bill 2015 (Senate Bill) and 2014 (Executive Bill) which seek to repeal the Tobacco (Control) Act 1990.

The bill specifies the specific places where users of cigarette could smoke and areas where smoking was forbidden.

The 52-clause document also prescribed various punishments for either the smoker who flouts the law or owner of public places who failed to paste ‘no smoking’ inscription on their premises.

Deputy Senate President, Ike Ekweremadu, who presided over the plenary noted that the bill when assented to by President Goodluck Jonathan, will repeal the existing law, titled, “The Tobacco Smoking (Control) Act, CAP.T6, LFN 2004, enacted in 1990.

The  bill, sponsored by the Chairman, Senate Committee on Health, Senator Ifeanyi Okowa, according to Ekweremadu,  will also ensure effective regulation and control of production, manufacture, sale, labeling, advertising, promotion and sponsorship of tobacco and tobacco products in Nigeria.

He said it will further ensure balance between economic consideration and health implications of tobacco manufacture, use and exposure.

Ekweremadu said, “The passage of the bill is a milestone for us at the senate. The dangers associated with smoking cannot be overemphasized and the tragedy here is that those at risk are not just those who smoke but also those around them, their loved ones,  their families, neighbors and friends.

” It is important that we regulate smoking and other matters related with tobacco manufacturing and sales.