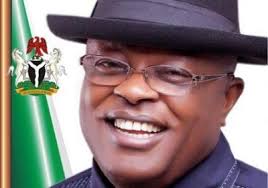 By Sadiq Umar – The Secretary to the Government of the Federation, Engr. Babachir Lawal, has commended the Governor of Ebonyi State, David Umahi, expressing surprise that such performer could be found in the Peoples Democratic Party.

Lawal who was on a one-day visit to Ebonyi State on Thursday, said Umahi’s performance had become a challenge to all governors, including those of the All Progressives Congress.

A statement by the media aide to the Governor, Dr. Mcdonald Onu, quoted the SGF as saying that he would recommend Umahi’s ‘pragmatic type of governance’ to President Muhammadu Buhari, since according to him; it should be a model for other governors to emulate.

“Governor David Umahi has performed more than what we see others do in the last six months. I will tell Mr. President that this state is a model of development for our country.” it stated.

Turning to the governor, he jokingly added, “Sometimes, we get surprised that people like you are found in the PDP but there is a cliché that says good men are found everywhere.

“We like such people but we will not envy them if they remain in PDP because they also challenge APC governors to perform. That is the essence of opposition and competition in politics.”

The SGF applauded the prudence and integrity with which Umahi was managing the lean resources available to the state.

Lawal, who appealed to all Ebonyians, members of the State House of Assembly and the Executive to continue to cooperate with the governor to enable him do more, stated that “with the governor’s performances so far, he will win his election for a second term if in the APC.”

The SGF had inspected some projects in Abakaliki, including flyovers under construction and inaugurated the CBN Road in the Centenary city.

At one of the sites, Lawal, who was in company with the Ministers of State for Niger Delta and Labour and Productivity, Bar. James Ochili and Dr. Cladius Daramola,observed that the cost of the three flyovers was an indication that “the governor belongs to a cream of leaders in the country who are not greedy and corrupt.”

Lawal, who was honoured with a Chieftaincy of ENYIOMA of Ebonyi State by the state Traditional Rulers Council, noted that his visit to the state was not for politics, but as a functionary of the Federal Government.

He assured that he would assist in facilitating the Federal Government’s refund to the state of the over N10bn spent on the construction of federal roads in the state.

Speaking at a state Banquet, Umahi said the appointment of Lawal as SGF was an act of God.

The governor maintained that his support for the President’s administration should be seen beyond party differences, stressing that his intention was to get Ebonyi State on the right track and not party politics.

Gov. Umahi said, “For me, the Nigeria project is not all about party, and the earlier we forget about party to an extent after elections, the better for this country.”

He explained that the newly reconstructed Governor’s Lodge was named after the first civilian governor of the state, Senator Sam Egwu as a mark of recognition for his humility, honesty and selfless contributions to the development of the state.

Earlier at the Spera-In-Deo flyover site, the Commissioner for Works, Engr. Fidelis Nweze, disclosed that the flyover projects were awarded at the coast of N5.482bn