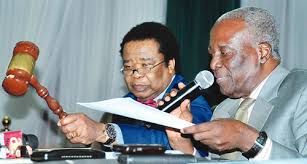 By Olusegun Emmanuel, Abuja. The plenary session of the National Conference drew to a close on Monday without any clear resolution of the contentious issues of revenue allocation and derivation principle.

The Conference wound up following the completion of debate and adoption of resolutions arising from reports of its 20 standing committees that considered critical issues tabled before the Conference. Conference Chairman and former Chief Justice of Nigeria, Justice Idris Kutigi, said the next plenary session would be on August 4, 2014 when delegates would reassemble to consider and approve the final reports of the Conference for presentation to the Federal Government. Specifically on Monday, Conference formally adopted the Report of the Committee on Devolution of Power but without conclusive decision on the vital issue of derivation principle and what percentage should be paid mineral producing areas. After days of fruitless discussion by leaders of geo-political zones at the Conference, Justice Kutigi and other principal officers of the Conference met with selected leaders of delegations to the Conference; co-chairmen, chairmen and deputy chairmen of all the Standing Committees to decide on the matter. The first meeting scheduled for Friday last week did not hold as most of the selected delegates scheduled had already concluded their travel plans in view of the imminent closure of Abuja airport that Friday afternoon for maintenance work on the runway. As soon as the Conference resumed on Monday, Justice Kutigi said: “I’m still of the view that the Committee that is handling the matter of coming to a compromise will still do their job. “We couldn’t have the meeting on Friday. So, I am proposing that we give them two hours to meet with us.” He then invited the “Fifty Wise Men, Committees Co-chairmen, Chairmen and Deputy Chairmen to meet now in our usual place.” After five hours of close-door deliberation on with the leadership of the Conference, both the southern and the northern delegates refused to agree on some of the issues thrown up in the initial meetings of some regional leaders.

The last seemed to have been the point of controversy as some of the leaders insisted that the intervention fund should be for the entire country where such was required. The issue split the delegates along the north/south divide, but during meeting between the selected delegates and principal officers, it was suggested that since there are other areas that funds are being allocated from the Federation Account outside the issues being considered, it would be proper to have a technical committee to take a wider look at the revenue allocation framework and determine the appropriate percentages on the three issues under consideration and advise government accordingly. But before endorsing that decision, the meeting had critically examined the issues in contention and recognized the need to review the percentage of revenue allocation to oil producing states including those producing other resources; to reconstruct and rehabilitate areas affected by problems of insurgency and internal conflicts; and the diversification of the economy by fast tracking the development of solid minerals.   Conference chairman, Justice Idris Kutigi then conveyed the decision of the leaders to delegates at resumption of plenary. Although some delegates kicked against the decision lamenting the irreconcilable positions of the delegates from both sides, majority of them agreed that the decision was not just a compromise position but a reasonable one in view of the technical nature of the revenue allocation infrastructure. As delegates started re-opening debate on the issue, the chairman declared, in line with the Rules of Procedure that having adopted the report of the Committee, “this effectively brings us to the end of this debate.” The Resolution reached at the meeting of the leaders and principal officers of the Conference reads thus:Having critically examined the issues in contention, Conference recognizes the need to:a)    Review the percentage of revenue to states producing oil (and other resources)b)   Reconstruct and rehabilitate areas affected by problems of insurgency and internal conflicts; andc)    Diversify the Nigerian economy by fast tracking the development of the solid minerals sector;

The Conference also notes that assigning percentages for the increase in derivation principle, and setting up Special Intervention funds to address issues of reconstruction and rehabilitation of areas ravaged by insurgency and internal conflicts as well as solid minerals development, require some technical details and considerations.

Conference therefore recommends that Government should set up Technical Committee to determine the appropriate percentages on the three issues and advise government accordingly.