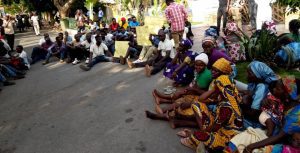 By Nuel Suji – Armed policemen on Monday invaded the residence of controversial Kogi Senator, Dino Melaye, just as Nigerian masses from the Internally Displaced Camp (IDP) also mobilized to the location to prevent police from arresting him.

The policemen, according to Mr. Melaye, a in tweet numbered over 30 that invaded his no. 11 Sangha Street, Maitama, Abuja around 11 o’clock.

Earlier Mr. Melaye was arrested in the morning at the Nnamdi Azikwe International Airport, Abuja, on his way to Morocco on official duty.

He was, however, released few hours later by the Nigerian Immigration Service, only for the police to storm his Abuja residence.

It was not clear while the police took the action, but sources said it may not be unconnected with the earlier invitation by the police authority for him to appear in his home state for interrogation over allegation of gun running..

Some senators were also in the residence to ascertain what was going on. They were believed to have been sent by the President of the Senate, Bukola Saraki, a close ally of Mr. Melaye.

The fierce looking armed policemen, it was further gathered claimed they were acting on order from above when the Senators demanded for explanation on the matter.

“All roads leading to House has been condoned off, as heavy mobile police men blocked entry and exit of the road. They currently laid siege in and around the house. ”

Senator Melaye, a close ally of the Senate President, Bukola Saraki, chairs the ‘juicy’ Senate Committee on the Federal Capital Territory (FCT) and has been having a running battle with the governor of Kogi, Yahaya Bello who is close to the presidency. Both belong to the same ruling party, All Progressive Congress (APC).

Meanwhile, protesters from Internally Displaced Camp (IDP) stormed Mr. Melaye residence with a vow not to allow police to arrest him.