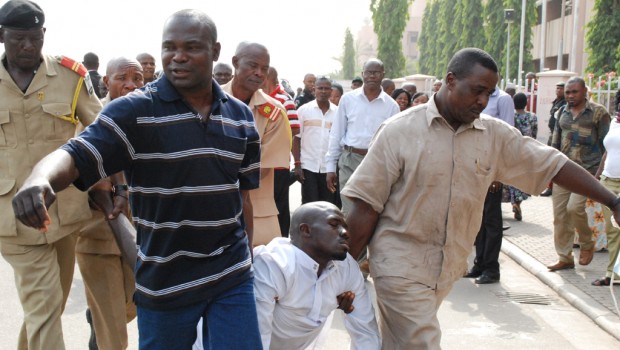 By Sadiq Umar – Kano State Police Command on Sunday foiled a planned attack by members of Boko Haram terrorist group in the state, even as it announced the arrest of five suspected members of the group.

The Command said it arrested five suspected Boko Haram attackers (three male and two female), while three Policemen sustained varying degree of injuries during an exchange of gun battle with the terrorists. 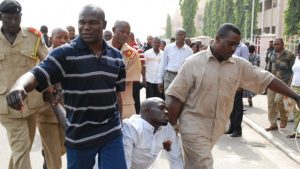 The State Commissioner of Police, Rabiu Yusuf disclosed this while parading the suspects at the command’s headquarters in Kano on Sunday.

He disclosed that the arrest was made following an active intelligence report.

According to him, the suspects were arrested at their hideout in Gayawa village of Ungoggo Local Government area while planning to attack various public places in the Kano metropolis.

“The sustenance of this operation by the special forces yielded positive result this morning when the team intercepted the remnant of the terrorist group while they were about to attack public centers, places of worship and other peoples’ gatherings.”

“The Police team came under attack from this remnant but it was repelled and five of them, three male and two females were arrested. Three of our officers sustained injuries from the IED and gunshots launched on them and are currently receiving treatment at hospital, “

Yusuf further disclosed that the suspected terrorists were nabbed after exchanging fire with the security forces, adding that 3 of the Police officers sustained various degree of through Improvise Explosive Device (IED) and were receiving treatment at hospital.

Others are Aisha Ya’u, aged 25 and Ladidi Yunusa, 27 years both from Kwana Hudu quarters in the state metropolis.

Yusuf disclosed that the arrest indicated that the remnant of the terrorists who fled Sambisa forest were re-grouping in some northern states including Kano.

The Police Commissioner further revealed that all the suspects confessed to being active members of Boko Haram group that carried several attacks on innocent people in Kano and other northeastern states.

He added, “It is because of the concern to ensure the fleeing terrorists don’t attack any location in the state, the Inspector General of Police, Ibrahim K. Idris set up joint Police special team, comprising of Special Tactics Force (STF), Special Anti-robbery Squad, Kano, the Force Intelligence Unit, other undercover and other Police team under the supervision of the CP, Kano command,”

He then called on the general public to be vigilant and provide useful information on suspicious persons and movements, adding that the arrest had indicated that the terrorists had infiltrated the state.