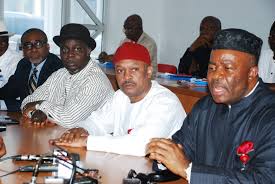 By Sadiq Umar – The Peoples Democratic Party (PDP) Senators on Wednesday staged a walk out during the plenary session following the failure of its president Bukola Saraki to declare vacant the seat of a defecting senator.

Yele Omogunwa, a senator representing Ondo South announced his defection from PDP to the ruling All Progressives Congress (APC). 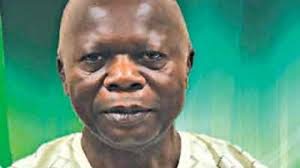 In a letter read by the Senate President, Saraki, Mr. Omogunwa said decision to defect was taken to enable him support for Rotimi Akeredolu’s election in the just concluded Ondo Governorship election.

“This declaration I have made in My local government on Sunday, 20th November to enable me actively canvass for the success of Mr. Oluwarotimi Akeredolu in the gubernatorial election of 26th November 2016”, he said.

Following the announcement, the Senate Minority Leader, Godswill Akpabio faulted in the eye of the law and requested the Senate President to declare his seat vacant.

Mr. Akpabio who cited order 43 to fault Mr. Omogunwa’s defection, said the only ground upon which a serving lawmaker could defect from one party to the other as specified in section 68(c) of the 1999 constitution as amended, is through division in the leadership of his party, which he said no longer exist in PDP.

The Senate Minority Leader said the recent judgements of both the Court of Appeal and Supreme Court in the nomination of governorship candidate for Ondo election, had put paid to the issue of division within PDP.

He explained that the appellate courts stated categorically in their judgments that the only known and recognized national leadership of the PDP was the caretaker committee under the Chairmanship of Senator Ahmad Markafi.

Mr. Akpabio was therefore asking the senate president to apply the provision of the law which prescribe that a defecting senator is liable to losing his seat.

But Mr. Akpabio was ruled out of order by Mr. Saraki, who said that the matter is controversial which runs contrary to the spirit and letter of order 43 on which Mr. Akpabio made his objection.

The rising temper among the PDP Senators over the development, heightened when Senator Dino Melaye, (APC Kogi West), who also came through order 43, said the division within the PDP National leadership between Markafi and Modu Sherrif still exist, which according to him, made “Omogunwa’s defection to be perfectly in order”.

Senator Peter Nwaoboshi (PDP Delta North), kicked against the action, accusing the Senate President of running foul of the Senate standing rules by allowing Dino to make remarks over an issue that had already been ruled upon.

“Mr. President, having ruled the Senate Minority Leader out of order over his objection and by extension, PDP Senators’ objection to Omogunwa’s defection, it was wrong to have allowed another Senator to remark on the same issue”, he said, to which Saraki responded to by saying “ noted”.

Apparently infuriated by the development, the PDP Senators staged a walkout out of the Chamber to Senate hearing room 2. where they addressed the press on why they took the action.

The Minority leader at the press briefing vowed that PDP as a party would ensure that it retrieved stolen Senatorial seat from Omogunwa through the courts since according to him, there was no division within the party leadership now.

“One of our colleagues, Distinguished Senator Yele Omogunwa, decided to jump the ship, maybe out of the excitement of the Ondo (governorship) election, which the PDP is challenging and other political parties. He did that, not taking into the cognizance of the recent Supreme Court’s decision settling the issue of the chairmanship of the party, which had been an issue in the last few months,” he argued.

That issue was settled in favour of Senator Makarfi’s leadership, which was set up at the Port Harcourt Convention.

“The moment that happened, that means that the PDP as a family has no division. The Supreme Court does not recognize any divisions in the PDP as of today because the issue has been settled.

“At the appropriate time, I believe that, working with the caucus, we will work with the national leadership of our party to take a correct legal pronouncement and ensure that the seat is declared vacant.

“Just like you observed, the reason for his jumping the ship from PDP to APC this morning is in order for him to go and support the new Governor-elect, Akeredolu; that is the reason. It is not on the basis that there is a division in the PDP and that is not recognised by the law. He stated in his letter that he wanted to go and support Mr. Akeredolu. He should do so by resigning and give us back our seat”.

With Mr. Omogunwa’s defection, PDP Senators are now 43 while APC senators have increased to 61 with Labour party having only one Senator, all totaling 105 on account of outstanding 3 seats from Rivers State and one from Anambra yet to be filled.