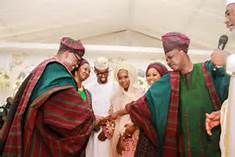 By Alaba Ajibade – Prominent Nigerians including acting President Yemi Osinbajo Saturday turned up for the wedding ceremony of daughter of Ogun State governor, Ibikunle Amosun and son of Senior Special Assistant to the President on Diaspora matters, Abike Dabiri-Erewa, at Abeokuta, capital of Ogun State.

Mr. Osinbajo, the Senate President, Bukola Saraki, House of Representatives, Yakubu Dogara and  former President Olusegun Obasanjo were among the top dignitaries who grace the occasion. 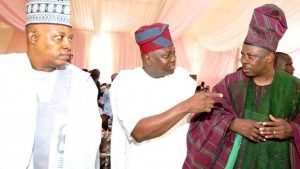 Some governors, traditional rulers and religious leaders as well as politicians and captain of industries also thronged the wedding programme.

The wedding was a spectacular show of glamour and opulence in Abeokuta, the Ogun State capital, by the elite members of the Nigerian society.

The officiating clergy, Abdul –Rahman Ahmad, who is  the National Chief Missioner, Ansarudeen Society of Nigeria, conducted the Nikah {holy matrimony} between  Ayomide and Oladipo  and pronounced them  formally as husband and wife according to Muslim right at  exactly 1:04pm amid rumble of cheers from the enthusiastic parents and dignitaries.

Executive Secretary of Joint Admission and Matriculation Board Prof. Ishaq Oloyede who acted as the Master of the Ceremony took over the stage after the traditional wedding and called the Islamic Scholars for their roles one after the other.

Sheik Ahmad in his brief sermon described marriage as an institution ordained by Allah and advised the couple to have the fear of Allah in dealing with one another and love each other.