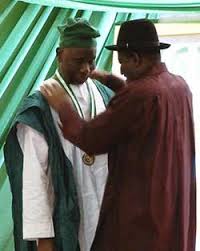 At last, the man who designed the green white green, Nigeria flag, Mr. Taiwo Michael Akinkunmi, has been conferred with the Officer of the Order of the Federal Republic, (OFR) national award, even as President Goodluck Jonathan appointed him his special assistant for life.

Akinkumi, 78, a retired civil servant, was honoured by Jonathan on Monday in Abuja alongside 313 other Awardees by Jonathan in this year’s national merit of the government of Nigeria.

Also, among the awardees are a presidential steward, a traffic warden and a taxi driver, Imeh Usuah, the 66-year-old who returned N18million forgotten in his car to the rightful owner. They were each given a house in Abuja.

Two of the awardees each received the First and Second Class of the Federal Republic Medal.