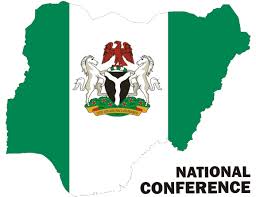 The National Conference Committee on Political Restructuring and Forms of Government has recommended unicameral legislature for National Assembly against the current bicameral house system at the federal level in the country.

However, during the committee session, some delegates also proposed 60 percent representation in favour of population and 40 percent for equality of States.

Other delegates kicked against it, insisting that 60 percent representation by population and 40 percent through equality of States would serve the country better.

According to Co-Chairman of the Committee, Mohammed Kumaila said, “We agreed that there should be a unicameral legislature with one House of Parliament at the national level as opposed to what we have today.

“In taking this decision, we took cognizance of the fact that the Senate as we have today with equality of States as the guiding factor while population is what determines representation at the House of Representatives.

“We have to reflect the two factors so that no segment of the State would feel neglected or undermined.

“The decision was based on the need for fairness, futuristic and building the country on a solid foundation because the issue of population is critical.

Some delegates also solicited for 10 percent representation that would take care of interest of special groups like women, youths and people living with disability.

The Committee eventually reached a compromise and voted on the three options where equal representation on the basis of the two options was agreed on.

Kumalia who was a former minority leader in the House of Representatives from Borno argued that, “There is no way we can compare Yobe and Kano when it comes to population, so, if we pick 100 percent representation on the basis of population, States like Kano would be disadvantaged as all would have the same number of representatives notwithstanding the number of their population.

“That is why we say the other half of 50 percent should be based on population because the parliament is about representing the people. Moreover we are also of the opinion that the 50-50 option would be easier to adopt at the plenary as all interests would have been taken care of.”

While appreciating the magnanimity of the members, Co-Chairman, Gen Ike Nwachukwu appealed that the Committee should not be embarrassed by those whose opinions were not accommodated by the Committee in arriving at the decision.