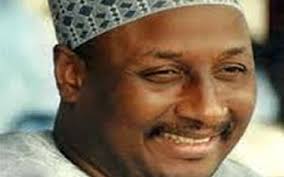 The embattled national chairman of the Peoples Democratic Party (PDP) Mr. Adamu Muazu, on Tuesday pleaded with members of the party and stakeholders sheathe their sword and come together to revive the party.

Governor Ayodele Fayose and his Niger state counterpart had demanded the resignation of Mu’azu following the defeat of the PDP in the last general elections.

Mu’azu, who said he was out of the country on medical treatment as a result of the rigorous campaigns during the recent elections, said though the party’s defeat in the last general election was painful, members should key into the intervention by President Goodluck Jonathan and not allow the situation to further divide the party.

In a statement personally signed by Mu’azu, the national chairman pleaded for peace, saying he appreciated the reactions of Governor Ayo Fayose and others on the issue of the elections

“In the last few weeks, the media has been fishing on these reactions with a section even blowing it out of proportion to a level that has become a threat to our oneness as a family, he said.

Adding: “As the National Chairman and a key stakeholder in this party in the last 16 years, I quite understand and appreciate the concern, pain and frustrations of our members regarding our defeat.

“I am also deeply worried about the division the development has generated within the PDP family especially regarding whether or not the national leadership should be dissolved as a direct consequence of our collective challenge.

“In the course of events, there have been reactions and counter-reactions among party members; mistakes have been made, some of them avoidable, but this is the time to put all of them behind us and move ahead as our party and its interest remain paramount and overriding.

“Expectedly, our party has had a share of media bashing and misrepresentations, which contributed immensely to the misunderstanding we are facing in our fold.

“For instance, in one of the press reactions from my office, the media quoted one of my aides as saying that our party will be “buried’ without the National Chairman, a clear deviation from what was actually said. Such misrepresentations of our party leaders also abound in the social media and we must be wary of them.

“However, I have already issued a strong warning to all my aides to henceforth desist from making comments on matters of party administration in the media or any other forum whatsoever.

“Having been a state governor on the platform of this party for eight years and having the grace of being a committed member for the past 16 years, I very much appreciate the reactions of some of our members like Governor Ayo Fayose, whose victory in Ekiti in June last year helped to strengthen our party, particularly in the southwest region.

“Nevertheless, in the larger interest of our party, we all must resolve to bury the hatchet, pick our pieces and move on to rebuild our party and return to our winning ways.

“In the wisdom of leadership of the party, we have set the machinery in motion by the constitution and inauguration of the Post Election Assessment Committee headed by the Deputy Senate President, Senator Ike Ekweremadu.

“The needful thing to do at the moment is for all hands to be on the deck with this committee to come up with meaningful report that will provide answers to our challenges and roadmap for the future.

“Furthermore, my absence from the country lately has led to some apprehensions within the party resulting in various public interpretations, but the fact is, following the rigorous campaigns and its attendant toll on my health, I had to yield to the advice of my doctor to take a two weeks bed rest for proper checks and recuperations. I am happy to inform all our members that I have been responding to care and will soon return to the country.

“Finally, I wish to charge all members that though we have had our setback, we are not down and out. The PDP remains the largest political party in this country. What we need now more than ever before is to unite as therein lies our strength as a family.
“Fighting ourselves will not yield anyone any good. Our members therefore must remain focused and join forces with their leaders at all levels to actualize our collective quest to rebuild the PDP and repositioning it to regain power in 2019”.