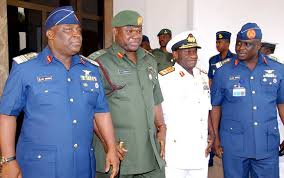 President Goodluck Jonathan is currently engaged in a crucial meeting with the military service chiefs at the State House, Abuja.

Also present at the meeting is the Chairman of the Independent National Electoral Commission (INEC) Professor Attahiru Jega.

The meeting which commenced at 11:20a.m behind closed door, sources say, is convened to review the levels of preparations by the INEC and the security agencies for the 2015 general elections.

The security chiefs are expected to give an update on security situations especially in the troubled northeast region where it has been battling the Boko Haram insurgents.

Also, Jega is expected to brief the National Security Council on the commission’s state of preparedness for the general elections.