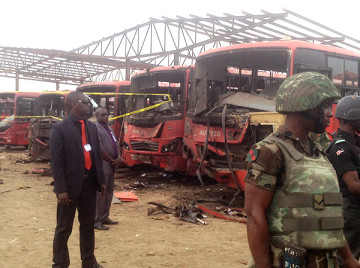 President Goodluck Jonathan has urged Nigerians to be security conscious even as he commiserates with families who lost their loved ones in the early morning bomb blast in Nyanya, an Abuja suburb.

Even as Police confirmed that 71 persons have so far died explosion that occurred at the ‘El- Rufai’ Motor Park in Nyanya, on Monday.

Police spokesman, Mr. Frank Mba, who spoke on behalf of other security agencies on the bomb blast, said 124 persons that sustained various degrees of injuries were being attended to at different hospitals in the FCT.  after President Goodluck Jonathan visited the scene of the blast.

He also said that 16 luxury buses were burnt while 24 others were destroyed in the blast.

The police spokesperson said information centres would be opened at all the hospitals where survivors are being attended to in order to provide information to their families.

Meanwhile, Jonathan who arrived the scene at 12.20am with the President of the Senate, David Mark, described the incident as an unnecessary distraction.

He said his government would intensify efforts aimed at ending the insurgencies being recorded in the country.

“We want to use this unique opportunity to plead with the media and our great men and women to come up with enlightenment programme for our people,” Jonathan said.

“Those countries that face terror, they have developed great awareness. If there are unusual movement of vehicles and bags, they call on security and based on this, a lot of incidences are contained. So we believe that if people will become observant and all of us become security conscious by the movement of people, we will be able to reduce some of these incidences,” he added.

The President also condoled with families of victims of the incident even as he commended the security personnel for their prompt response to the incident.

“Though we lost quite a number of people, we condole with our country men and women,” he said.

The President also urged the media to put up enlightenment programmes aimed at dissuading those behind the attacks.

The President also visited the injured at the Asokoro General Hospital, where he sympathize with some of the victims.

He commiserated with the families of the victims.