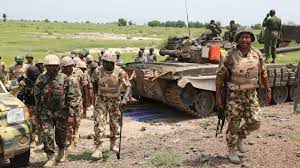 News Investigators/ The Buhari Media Organisation (BMO) has hailed Armed Forces over its recent onslaughts against Boko Haram terrorists, saying there is a remarkable improvement in security situation across the country in the last six months.

The group said the spate of air strikes since the beginning of the year in the remaining ISWAP/Boko Haram enclaves in the Lake Chad area has led to the eliminations of key commanders of the terrorists.

BMO, in a statement signed by its Chairman Niyi Akinsiju and Secretary Cassidy Madueke, said that the improvement in the security situation is a result of relentless attack on terrorists’ positions by troops.

The group also hailed the Kaduna State Government for monitoring the security situation and reporting developments, urging other subnational authorities to take a cue from the State by also ‘keeping an eye on things.

“Of particular interest to us is the spate of air strikes that have been employed since the beginning of the year in the remaining ISWAP/Boko Haram enclaves in the Lake Chad area to take out key commanders of the terrorists.

“Just a few days ago, based on credible intelligence, military fighter jets dropped rockets and bombs on a location where the terrorists had converged for a meeting, and in the process neutralized two leading members of ISWAP Shura council, Ali Kwaya, and Bukar Mainoka.

“Another precision strike by the fighter jets, about one hour later, also killed about 13 injured survivors being conveyed in two vehicles to another hideout.

“This is aside from similar airstrikes in Ngwuri Gana, last weekend, where a group of insurgents in 15 trucks had gathered,” it said.

“We know for a fact that air interdiction missions, as well as ground assaults, had been constant in the Lake Chad region since January this year and this had been a key reason over 15,000 terrorists, including the Boko Haram Chief executioner, and members of their families surrendered in the last few months to military authorities.”

BMO added that air strikes have also gone a long way in ensuring improved security situation along the Abuja-Kaduna expressway and Kaduna State in general.

“It is indeed a thing of joy to know that deaths attributed to banditry, terrorism, and violent attacks across Kaduna State have reduced in the second and third quarters of the year.

“According to a report presented by the Commissioner for Internal Security and Home Affairs, Samuel Aruwan, there has been notable progress since military operations were intensified in the state.

“The Kaduna government also noted that over 100 camps occupied by bandits and terrorists were destroyed, 74 kidnapped persons rescued by security forces while over 100 weapons, including 74 AK47 rifles and 5,398 rounds of live ammunition were recovered,” it said.

“Like many Nigerians, we see this direct involvement by the Gov. Nasir el-Rufai administration in resolving local security issues, especially by having a ministry devoted to internal security, as commendable.

“For us, it is a positive development that other State governments should take a cue from and do more to cooperate with security agencies rather than allowing the challenges of insecurity in their domain to fester.”