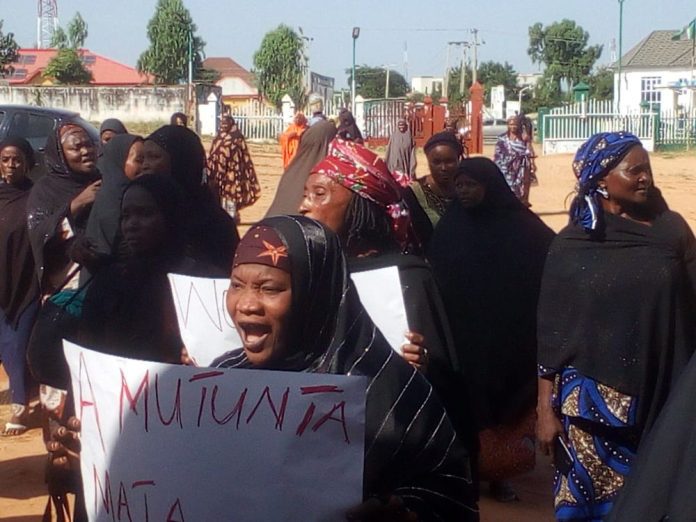 News Investigators/ The crisis rocking the Gombe State chapter of the Peoples Democratic Party (PDP) took a new twist Tuesday with women leaders and groups staging protest at the party secretariat over the non-inclusion of women in the campaign structure.

The women in their hundreds, stormed the secretariat along Bauchi road on carrying placards with different messages.

Some of the inscriptions on the placards read: “Respect women and their dignity”; ” No to women exclusion” among others expressing of angers and grievances. The women also threatened to boycott the gubernatorial campaign of the party.

According to one of the women leaders, “we are being neglected and don’t even know our stand in the party. How can you engage in a campaign without women? I don’t know if it’s possible to win election without the support of women. And another problem is that; information has reached us that the wife of the guber candidate won’t be joining our campaign. She said nothing would bring her from London to Gombe to campaign for her husband. Is that right?”

“We’ve seen Mama Yelwa (May Allah forgive her soul) when Sen. Goje was campaigning. She was the one leading us. Same thing happened during the campaigns of Talba and Sen. Bayero. But what we’re hearing and seeing now is very strange to us.

“This is not how is supposed to be. If you’re asking women to vote for PDP with a promise that their interest would be protected, if you don’t have the wife of the candidate at the field, they won’t believe you and you won’t have the confidence to continue,” she added.