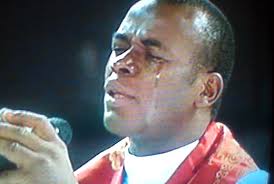 Enugu Catholic priest, Rev. Fr. Ejike Mbaka, has raised fresh alarms, alleging that there is a plan to assassinate him before the March 28 general elections.

Rev. Fr. Mbaka, said he is constrained to make a statement on what he called “the continued threat” to his life over his 2015 New Year message.

In a statement by the media officer of the Adoration Ministry Enugu, Nigeria, Barr. Ike Maximus Ugwuoke, the Reverend Father said he had been marked for death before the presidential election.

In the statement titled: “Jonathan Wants Me Dead Before The 2015 Election,” the Adoration Ministry warned that if anything happened to Fr. Mbaka, Jonathan’s government should be held responsible.

“It is with a deep sense of concern that we are constrained to make this statement on the continued threat to the life of Rev Fr Ejike Mbaka over his 2015 New Year message titled “From Good luck to Badluck,” the statement read.

Adding that, “the issue of threat to Fr. Mbaka’s life became a public knowledge that it formed the headline of the Sun news Publication of 5th January 2015, “My Life in Danger.”

“Two days later, 7th January 2015, Vanguard also reported that the Enugu State Police Command has refuted claims by Fr Mbaka that his life is in danger .

“It dismissed Fr. Mbaka’s outcry over threat to his life as baseless.

“The Police Public Relations Officer, Mr Ebere Amarizu , DSP was quoted as saying, ‘We do not have any report by Fr. Mbaka over threat to his life. We have not received any complaint from him.”

According to the statement, “On the backdrop of the above, one begins to wonder whether the alarm raised by Fr Mbaka on an alleged plot to kill him was a mere rhetoric as the police had made it to appear merely because there has not been an official report to the police over it.

“Absence of a formal report on threat to one’s life doesn’t negate the reality of such threat more so when the victim had made a public outcry on this issue.

“To argue otherwise is akin to denying the fact of death in the face of a man’s corpse merely because there is no certificate certifying his death.

“Rev Fr. Mbaka had consistently in his public outings been raising alarm over threat to his life and strange calls and messages threatening to assassinate him.

“The last of this was his assertion that assassins from the Presidency had been engaged to exterminate his life before the 28th March 2015 Election.

“This was coming after he had made a public statement on 8th March 2015 that in the presence of some named witnesses, he rejected a parcel of money sent to him by the First Lady through the Deputy Senate President, Ike Ekweremadu and that the rejected money was with the latter.

“The issue of threat to Fr Mbaka’s life has become worrisome that even at his last Friday’s adoration Programme held on 13th March 2015, he did not turnout in his usual car due to security alert he had of his planned assassination on that day.

“Yesterday strange hoodlums in a black hillux had besieged his parish compound but they left disappointed when they could not see him.

“Wherever and whoever this threat is coming from, we state that there are strong and compelling circumstances pointing towards the fact that Fr. Mbaka’s latest attacks were stemming from his said 2015 New Year message which was not favourable to the President Goodluck Jonathan led administration.

“We also wish to state that before the 2015 New Year message of Fr .Mbaka, he used to pray for Jonathan’s Government and never raised any alarm on threats to his life but after the 31st night message which he was inspired to preach by the Holy Spirit he has been making a public outcry of threat to his life.

“This is a clear case of a witch cries in the night and ones child is found dead in the morning.

“We advise the Goodluck Jonathan’s government that he has a duty to protect and guarantee Fr Mbaka’s life as Adorers, Nigerians, the Catholic Church and indeed the international community will readily point accusing fingers to him, in event of any misfortune against Fr Mbaka or Adoration Ministry Enugu Nigeria.

“With the stage the level of threat to Fr Mbaka’s life has reached, we call on Nigerian Police and indeed all security agencies in this country to protect the life of our Spiritual Director we else may resort to enforce his fundamental Rights to life against President Jonathan’s led government as guaranteed under section 33 of the 1999 Constitution of the Federal Republic of Nigeria as amended which confers on Nigerian citizens the power to secure the enforcement of their human rights even in events of likelihood of any infringements.

“This is apparently due to the fact that the right to life can only be enjoyed by the living” the statement concluded,” it added.