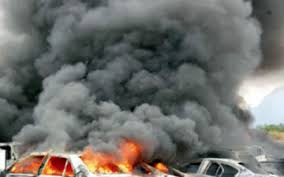 A deadly blast has occurred  at the School of Hygiene, situated along Bayero University (BUK) road, in Kano.

Sources told News Investigators that the blast occurred from an object suspected to be bomb exploded at the school premises at about 3p.m. killing four persons with scores injured.

“The school is very close to Murtala House in Kano, an object suspected to be bomb exploded and 4 people are lying died on the floor,” the sources said. Adding that there could be more casualty figure.

“Twenty injured persons have been rushed to the Murtala Muhammed hospital where they are now receiving treatment,” ours sources added.

There is no official comment on the incident yet.