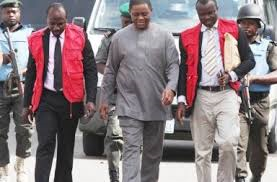 By Dipo Awojobi – The Economic and Financial Crimes Commission on Friday arrested a former Minister of Aviation, Femi Fani-Kayode, on new allegations of fraud.

Mr. Fani-Kayode was arrested as he emerged from a courtroom, where he’s been facing separate money laundering charges since June.

Mr. Fani-Kayode’s arrest comes days after his wife, Precious Chikwendu, was reportedly detained in a bank in Ado-Ekiti, the Ekiti State capital, on allegations of running bank accounts that were under investigation.

Mr. Fani-Kayode had raised alarm on Thursday that the EFCC was plotting to arrest him as part of an alleged attempt by the government to silence him for remaining an unyielding voice of opposition.