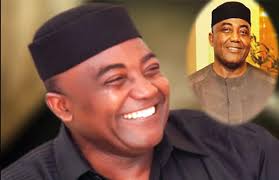 The People’s Democratic Party Caucus in the House of Representatives has urged President Muhammadu Buhari to call his All Progressives Party (APC) members to order.

The caucus led by the former Deputy House Leader, Rep. Leo Ogor also apologised to Nigerians for what he described as the show of shame of the APC members.

The PDP caucus explained that the House has a procedure of conducting its session in line with the standing rules but noted regrettably that the APC disrupted the day’s proceeding by not allowing the speaker to conduct the business of the day.

“We apologise to the Nigerian people and our constituents for what happened at the floor today (Thursday). And we also advised APC to abide by the rule of law and to learn to solve their problem outside the chamber, and Buhari should call them to order.” Ogor stated.

Meanwhile, APC members pushing for party supremacy has blamed Speaker Yakubu Dogara for the unfortunate incident in the House.

Rep. Garuba Daura, (Kastina, APC) who spoke on behalf of other members explained why proceeding was disrupted, saying what happened was a reaction to the unconstitutional action taken by the speaker by disregarding the wishes of his party, APC.

“This action by the party and the APC caucus is in compliance with the Nigerian constitution, the House rules and parliamentary traditions

“But to our surprise and in breach of our privilege and rights as contained in the constitution and extant House Rules, Mr. Speaker refused to read the letter from our party.”

He insisted that Dogara cannot under any extant rules appoint, choose, select, dictate or even provide guidance on how principal officers emerge or are elected.

The lawmaker said that speaker’s action won’t be allowed to stand because it could set dangerous precedence in the nation’s parliamentary practice.

Earlier, in the day, the two factions of the All Progressives Congress, APC — the Speaker Dogara group and those loyal to the party and Femi Gbajabiamia engaged one another in disgraceful physical combats.

The session became very rowdy and combative when the group loyal to the party wanted the Speaker to read a letter from the chairman of APC nominating Gbajabiamila and others as principal officers.

Instead of reading the letter, Dogara opted for a closed door session but this did not go down well with Gbajabiamila’s group and they went for the mace.

The sergeant at arm who rushed in from the senate wing rescued the mace from members and took it out of the chamber.

What followed was pandemonium as members threw decorum into the wind and engaged in a brawl like Motor Park touts.