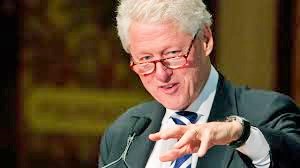 By Sadiq Umar – Former US President Bill Clinton, on Monday, cancelled his much publicized peace mission trip to Nigeria, citing the tendency by politicians to politicized the trip in a way that is not in line with the goals as reason.

The cancellation is coming on the heels of accusations by Buhari President Campaign Organization which accused the United States Ambassador to Nigeria, Stuart Symington, of bias in his comments on the forth-coming general elections.

The All Progressives Congress (APC) campaign organization had criticized Mr. Symington, describing his repeated calls for free, fair and peaceful elections in Nigeria as “unguarded statements.”

The Muhammadu Buhari campaign organization spokesperson, Festus Keyamo, said “the constant statements by Ambassador Symington and the other diplomats are implicit attacks against the government of Nigeria.

Mr. Keyamo, in a statement on Monday the envoys’ comments implied that the Nigerian government is inclined to rig the election in favour of President Muhammadu Buhari.

Mr. Clinton was earlier scheduled to arrive Nigeria on Tuesday 11th of February where he is expected to meet with presidential candidates of the two leading political parties in the 2019 general elections.

The former US president would have visited Abuja, the nation’s capital, with the Secretary-General of the Commonwealth, Baroness Patricia Scotland.

The planned visit was organised by the Kukah Foundation and the National Peace Committee (NPC).

Determined to help Nigeria achieve a peaceful, fair and credible poll, the NPC had reached out to the former American president others to help ensure a smooth electoral process.

The peace body may have made the move taking into consideration the high fatalities (an estimated 200) that dogged the 2015 general elections which the incumbent President Goodluck Jonathan and PDP lost to then candidate Muhammadu Buhari and his APC.

“Over the course of the last several days, and after various conversations with the different stakeholders,” Clinton’s spokesman, Angel Ureña, said in a statement, “it’s become apparent that President Clinton’s visit to Nigeria has the potential to be politicized in a way that is not in line with the goals of the Committee. Therefore, he will not be travelling to Abuja.”

Ureña, however, assured that Clinton would continue to support the NPC’s work toward achieving a peaceful and fair elections in Nigeria.

The spokesperson also assured that Clinton would speak to both Buhari and Atiku Abubakar later this week.

“This is a crucial time in Nigeria, and President Clinton is hopeful that the election’s outcome reflects the will of the Nigerian people,” the spokesman further stated.