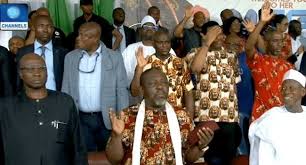 By Sadiq Umar – The opposition Peoples Democratic Party (PDP) has criticized the Tuesday southeast zonal rally of the All Progressives Congress (APC) in Owerri, Imo state capital, describing it as a mockery on President Muhammadu Buhari by the members of his own party.

APC said “Nigerians had a comic relief as speaker after speaker made a mockery of the president by ascribing non-existent projects as well as those initiated by others, particularly, the PDP, to him in furtherance of APC’s renewed attempt to beguile Nigerians ahead of 2019 general elections.” 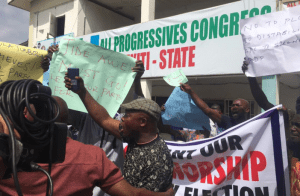 The PDP, in a statement by its National Publicity Secretary, Kola Ologbondiyan claimed that “even the rented crowd showed and expressed a vote of no confidence on the ill-performed President and his party, as they refused to brandish the now famished APC brooms or respond to the party’s slogan, a development that signposts the rejection of the APC in the zone and of course, in other parts of our nation.

“Is it not pathetic for President Buhari or the APC to, in anyway, think that they can suddenly enchant the people of the Southeast by false claims like those made about the Second Niger Bridge, Enugu-Onitsha Express way, Akanu Ibiam Airport, Enugu, among other projects, when the reality in the zone remains a bold testament of maltreatment, official disdain and government’s insensitivity?

“Is it not also a height of foolery and political delusion for APC to think that the people of the southeast will suddenly churn out five million votes and deliver same to a party that overtly relegated them as mere “five percent”?

“Worse still, all the APC leaders, who spoke at the rally, were all ill at ease, had no clear message, but dwelt only on empty sloganeering without regard to the sensibilities of the people, who had been subjected to the worst kind of relegation by their party in the last three years.

“It will be instructive for the APC to accept the fact that the Southeast zone remains the stronghold of the PDP and no amount of hollow grandstanding by the fractious APC and its rejected leaders can detract from that fact,” PDP stated.