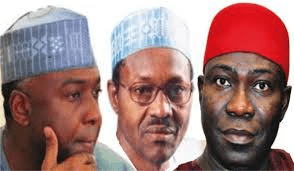 By Nuel Suji – The Attorney- General of the Federation ( AGF), Abubakar Malami, on Wednesday disclosed that the forgery case trial recently instituted by Federal government against the Senate President , Bukola Saraki, his Deputy, Ike EKweremadu and two others , would be prosecuted to the end in line with public interest .

Mr. Malami who made the disclosure while appearing before the Senate Committee on Judiciary, Human Rights and Legal Matters , said the case arose from violation of section 60 of the 1999 constitution as amended, in the alleged amendment of the 2015 Senate Standing Rules.

According to him, the way and manner the alleged amendment of the 2015 Senate Standing rules was carried out , were not in compliance with provisions of section 60 of the 1999 constitution in procedures and proceedings, the basis upon which the case was filed .

He explained further that rather than serve as imminent threat to democracy as declared by the senate in its resolution of 21st of last month , upon which he was summoned by the committee, the trial was instituted to sustain democracy.

He said: “I wish to state that I have a clear obligation to do whatever that can possibly be done to sustain democracy.

“Section 60 of the 1999 Constitution (Amended) states that the National Assembly shall have powers to regulates its own procedure.

“If the procedure in question was not followed, then it does not fall within section 60 of the constitution.

“When the need for amendment of the Senate Rules arose in 2011, the senate conducted a proceeding and passed resolution for amendment

“The 2015 rule as allegedly amended did not pass through the traditional way of doing things. That is where the inherited investigation and now criminal case comes into being.

“In as much a senate has powers to regulate its procedures any rule that did not following the processes as stated above is a breach.

“The need to prevent abuse behooves on me. The parameter, arising from the breaching of section 60 is to ensure that I take logical criminal step to ensure things are done within the constitutional provision”.

Section 60 (1and 2) state thus: “Subject to provisions of this constitution, each House of Parliament may regulate its own procedure.

He added that the Senate as an Institution, is not a party to the case before the court and that Bureaucracy was not in anyway contemplated by the provisions of section 60 of the constitution on amendment procedure of the senate standing rules.