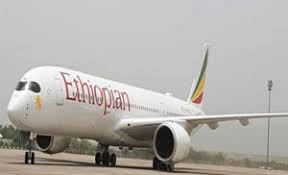 Minister of Aviation, Hadi Sirika says it it yet another promise kept by the Buhari administration.

The airport was closed down Wednesday, March 8, 2017 following the Federal Government’s decision to carry out maintenance of its runaway.

As part of the events to usher in the re-opening, there was a test flight with the Minister of State for Aviation Mr. Hadi Sirika and other officials aboard, from the Kaduna International Airport to NAIA. The flight, an Ethiopia Airline carrier airbus touched down at 12.00noon Tuesday.

FG has announced during the closure that the maintenance would last for six weeks, hence the reopening Tuesday, April 18, 2017.

Its decision to relocate to Abuja, 2hour distance by road to Abuja, was marred in controversy with stakeholders protesting the move citing security concern among other issues of concern.

Many of them especially foreign airlines were not convinced but instead declined to fly their planes to the Kaduna airport.