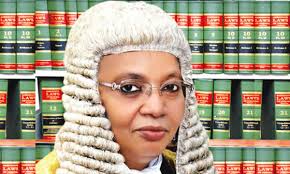 (News Investigators) /President of the Court of Appeal, Zainab Bulkachuwa has recused herself from the presidential election petitions tribunal sitting in Abuja.

Justice Bulkachuwa announced her withdrawal from the five-member panel of the presidential election petitions tribunal on Wednesday following pressure from the opposition Peoples Democratic Party (PDP) who objected her involvement citing possible likelihood of bias.

PDP and its candidate in the last Presidential election, Atiku Abubakar had also alleged fear of pre-conceived bias since Mrs Bulkachuwa is married to a Bauchi senator-elect of the All Progressives Congress (APC).

Both parties are challenging the victory of President Muhammadu Buhari in the February presidential election.

After a prolong proceedings Wednesday, Mrs Bulkachuwa declared: “I have allowed the ruling on the application urging me to recuse my membership of the tribunal to test the position of the law.”

She observed that, “now that the application has been dismissed on account of incompetence, I hereby announce my withdrawal from the panel.

“The remaining four members of the panel would remain while step would be taken to appoint my replacement.’’

In a letter signed by PDP National Chairman, Uche Secondus and National Secretary, Umaru Tsauri, the party said Adamu Bulkachuwa, her husband, contested and won the Bauchi north senatorial district election under the platform of the ruling party during the February 23, 2019 poll.

“My Lord, it is no more a secret, that your dear husband, Hon. Adamu Mohammed Bulkachuwa, contested the February 23, 2019 election for the position of Senator in Bauchi North Senatorial district and won same on the platform of the All Progressives Congress (APC),” the petition read.

The tribunal subsequently fixed May 22, to entertain the application seeking her withdrawal.

The PDP and Atiku Abubakar, its presidential candidate in the February 23 general election, are before the tribunal to challenge the outcome of the presidential election.