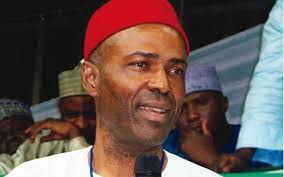 By Jackson Udeani – The Minister of Science and Technology, Dr. Ogbonnaya Onu, has paid a surprise visit to Ebonyi State Governor David Umahi at his country home in Uburu, Ohaozara Local Government Area.

Onu and Umahi have been rumoured to be at loggerhead over political differences.

The governor belongs to the Peoples Democratic Party while Onu, a former governor of the old Abia State, is a member of the All Progressives Congress.

A statement by the governor’s media aide, Mcdonald Onu, said “neither Onu nor Umahi spoke to the press after the visit which was seen by a large gathering at the Umahi compound as ending a seemingly political animosity between the two Uburu-born politicians.”

The statement quoted the Caretaker Committee Chairman of Ohaozara LGA, Justice Ogbonna, as saying that the visit as a sign of peace and unity in Uburu community.

The visit has put to rest the peoples’ insinuation that Dr. Onu and our governor are not enjoying good relationship, forgetting that both of them come from the same community”, Ogbonna was further quoted.

He described governor Umahi as a special gift to the people of Ebonyi State who has within a short time of his administration recorded many achievements.

Others that paid Christmas homage to the governor were the state Commissioner of Police, Peace Abdallah, a delegation from the Ezza South LGA , Association of Persons with Disabilities, Abakaliki Main Market Traders Association and Governor Umahi’s 1976 classmates in Uburu.

Addressing the people of Ezza South,Engr. Umahi described the Ezza nation as a major force behind his success at the April governorship election.

He saluted the courage displayed by them during the electioneering period even in the face of intimidation.

Explaining that the appointment of many Ezza people as his cabinet members was a reward for their strong support and commitment, he promised to energise Onueke in the first quarter of next year in the ongoing rural electrification in the state.

The member representing Ikwo/ Ezza Federal Constituency, Chief Lazarus Ogbee, assured Umahi of the continued support of the people of Ezza . He said that the National Assembly would remain focused in 2016 to make good laws that would improve the lives of every Nigerian.