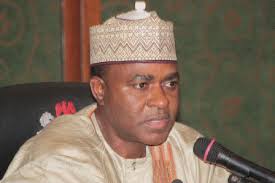 ABUJA, by Shaban Akanbi. A former governor of Bauchi State, Mr Isa Yuguda, on Tuesday said that the challenges of banditry in the North West of Nigeria might have an international dimension.

He said he was in the villa to show solidarity with the President over the security challenges currently facing the country.

According to him, Nigeria is a big country with a population growth from 60 million in the 1960s to about 200 million at present, hinging the frequent farmer/herdsmen clashes on competition for land.

The former governor said that while there were some criminal elements among the herdsmen, it would be unfair to criminalise the entire pastoralists in the country.

“All those cattle routes that were established by the British colonialists have been closed down because of human habitations; even the grazing reserves have been taken over by farmlands as population keeps growing.

“So, some of these criminals would have taken advantage of all of these to unleash mayhem on the people. This is not acceptable and I believe the president is addressing it to the best of his ability.

“In the North-West, for instance, we are witnessing a lot of challenges when it comes to banditry and you may not know where the bandits are coming from.

“It cannot fully be a local problem; it could be an international problem, probably migration from somewhere.

“Criminal elements from all other parts of Africa could have assembled and said ‘look, let us go to a richer country like Nigeria and ravage them and seize everything that they have’.

“It could be crossover and they may have some local converts who would like to go their own way,’’ he said.

Mr. Yuguda said that the southern part of the country was also not insulated from kidnappings which, according to him, started with oil workers long time ago.

The former governor, who said that insecurity in Nigeria did not start with the Buhari-led administration, added that Boko Haram started in Bauchi “but was contained by the Grace of God.”

He commended the Federal Government for substantially defeating Boko Haram insurgency in the North-East, even as he expressed optimism that the security problem confronting the country would soon be surmounted.

“So, it is not a new thing but life is dynamic; there is no problem that cannot be managed; you can’t have a country without leadership.

“So, as long as the people are willing and he (the president) too has the vision to address the problem, I think we are going to win.

“We are praying for the president to surmount all these problems as quickly as possible and we believe that the security team, that is, the police, the army, the air force and the navy are doing their best.

“They should add more prayers and rededicate themselves so that within the shortest possible time, they will be able to rid the country of criminal elements,’’ he said.