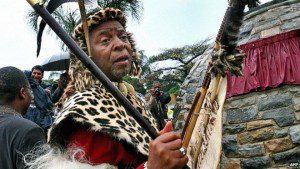 Zulu King, Goodwill Zwelithini, has appealed for calm after recent violence against migrants in South Africa.

He has been accused of fuelling the attacks, which have killed at least seven people, after saying foreigners should “go back to their countries”.

More than 300 people have been arrested in the unrest.

Thousands packed into a stadium in the eastern city of Durban to hear King Zwelithini’s address. He says his comments were distorted by the media.

In King Zwelithini’s speech, he said it was not fair to blame the violence on one individual, pointing out that there had been previous outbreaks of xenophobic violence in South Africa, dating back several years.

He added that the South African Human Rights Commission should investigate the hate speech charges against him without hindrance.

The BBC’s Karen Allen says there was anti-foreigner sentiment in the crowd, which booed the ambassadors representing the countries whose nationals had been affected.

Among the latest arrests were three men detained in connection with the murder of a Mozambican national in Alexandra, a township in Johannesburg.

South African photojournalist James Oatway witnessed Emmanuel Sithole being stabbed to death in broad daylight and has spoken to the BBC about what he saw:

Except for Mr Sithole, those killed have been in Durban, the biggest city in South Africa’s KwaZulu-Natal province. They are an Ethiopian man, a Mozambican man, a man believed to be from Zimbabwe and three South Africans.

South African President Jacob Zuma has condemned the attacks, saying they “go against everything we believe in”.

With the unemployment rate at 24%, many South Africans accuse foreign nationals of taking jobs from locals.

Official data suggests there are about two million foreign nationals in South Africa, but some estimates put the number much higher.