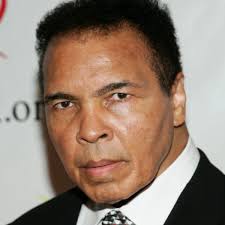 By Dipo Awojobi – Legendary boxer, the boxing entertainer, the greatest boxer of all time, Muhammed Ali has died at 74.

He was born originally as Cassius Marcellus Clay, Jr. on January 17, 1942 in Louisville, Kentucky, United States.

This greatest boxer, around the peak of his career as a professional sportsman changed his name to Muhammed Ali.

He was the most thrilling, if not the best heavyweight boxer of all time, a towering figure with an agile mind, who was both admired and vilified for his religious, political and social dictates. May his soul rest in peace.